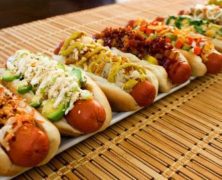 This article is about an important topic in “real” baseball. As many of you know, with baseball being both my hobby and my job, I manage to maintain my fandom by compartmentalizing fantasy analysis and the real game, and working hard to keep them separate. That means, for the past 31 years, whenever I set foot into a ballpark, it is as a fan.

I enjoy seeing different parks. My report card is nothing special compared to some people, but I have been to 19 current major league parks, six MLB parks no longer in existence, and probably about 20 minor league parks from Triple-A down to the Appalachian League. However, no matter where I am, it all comes down to the four core pleasures: sun, rooting, beer and dogs.

With the sun, it’s either there or it isn’t; I have no control over that. Rooting takes on many different forms, depending upon who is playing; I can root for a team, or specific players, or I can just root for a good game. Beer is beer, I’m afraid. I know what I like, and hopefully there is enough variety for me to find something cold on a hot day.

But when it comes to hot dogs, I hate to admit that I’ve become a bit of a snob. There are ways to prepare and dress the perfect frankfurter, and there are ways not to do it. Frankly (ha!), a single dog can make or break the entire ballpark experience.

Now, I am not an extreme elitist. I know that there are gourmet dogs garnished with everything from jalapeno cream cheese to corn chutney to poutine. I love those in the appropriate venue. But we’re talking about ballpark dogs, after all. These are our culture’s blue collar brats. Still, there are certain standards that must be maintained. Every concessionaire that exceeds the standards earns points in my book. It’s really not that hard.

In fact, I have developed a scoring system. (You’re not surprised, right?)

The foundation starts here. The best bun I ever had was at a small standalone shack in Railroad Square, Nashua NH (sadly, no longer there – the shack, Nashua still exists). It was made with egg-enriched dough and freshly baked on the premises. Yes, it was not at a ballpark, but there is no reason an innovative concessionaire could not upgrade to a similar level. So let’s score it out this way:

This mostly comes down to taste. The beefier the better, but the taste of some dogs is clearly dulled down with fillers. I can’t describe it any other way but I know it when I taste it.

This is actually more important than the dog composition because even the best-constructed frankfurter will be left lifeless if it’s cooked improperly.

Why are the above prep methods so great? The char covers a greater square footage and adds immense flavor. Sadly, these are all tough to find.

-2       if the dog is served pre-wrapped.
Pre-wrapping the dog is an insidious practice intended to conceal the all-important prep. Was the dog cooked this morning, or last Tuesday? If a concessionaire stockpiles wrapped dogs in a warmer to keep up with demand, that just means he needs a bigger grill or more workers. This is not rocket science, people.

This is where we separate the men from the boys. In the end, the toppings make the dog. The more offerings, the better, but there are some that are just…. yum. Admittedly, I have my own personal preferences, so feel free to adjust these scores to your own palate.

+0                   Faux dog toppings: ketchup, barbecue sauce
Ketchup is a hamburger condiment and has no business being anywhere near a frankfurter. Similarly, barbecue sauce is terrific on chicken and pulled pork. Just because you walk past by the dispensers with a hot dog in your hand doesn’t mean you should sully your sausage with an unsuitable sauce.

So, there you have it.

By means of setting a bar, here are the two best hot dogs I’ve had at any ballpark, and their scores:

Hunnicutt Field, Princeton WV
This was the oddest of places to find a great dog, but the Tampa Bay Rays affiliate in the Appalachian League takes great care with their franks (at least they did back in 2008 when I was last there). The Hunnicutt dog is (was?) average heft beef (+4) split-and-fire-grilled! (+10) on a doughy fresh bun (+5) with yellow mustard (+1), onions (+1), chili (+2) and cole slaw (+3). Total score = 26. Special kudos on the cole slaw as most establishments would not risk food borne illnesses by offering a mayonnaise-based topping on a hot summer day. Thankfully, this was a night game.

I recall thinking back then that sauerkraut and brown deli mustard would have made it a perfect experience. Yes, I remember this dog well as I wrote about it for BaseballHQ and was able to pull up that file from July 25, 2008. Yum.

In the end, the goal in hot dog scoring is 20 points. If an offering can’t reach or exceed 20, it’s just a dreary old dog, a workaday wiener, a bourgeois brat. Next month, I’ll be writing about a special ballpark tour I recently took (five parks in 46 hours) and grading the dogs, for your dining intelligence. In the meantime, I encourage you to score the dogs on your own ballpark visits, and sharing them below.

19 thoughts on “The Hot Dog Scale”