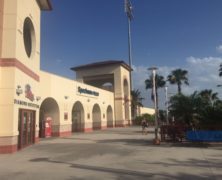 The 90-minute drive to Clearwater was mostly uneventful, though I always do enjoy the magnificent views crossing over Tampa Bay on the Sunshine Skyway Bridge. As I turned onto the street that the ballpark was on, I was immediately redirected into an overflow parking lot and asked to pay $3. I was a bit confused; looking around, I saw no signs of Spectrum Field. As it turned out, the overflow lot was, I think, in Pittsburgh.

So I walked to the park, which helped me fulfill my Fitbit goal for May… and June. I paid $8 for a ticket and headed into the stadium, but was stopped at the entrance. A pair of large, navy-clad humans stood guard over a metal detector and asked me to empty my pockets. This was the first FSL venue that had security. Interesting. What could they be protecting?

With the start of the game still a few minutes away, I was surprised by how crowded the park was. (In retrospect – they were using overflow parking – duh.) I was even more surprised to take my seat and check the scoreboard. The game was in the seventh inning. Had I misread the schedule?

Something we all live with in Florida is the threat of sudden torrential downpours (there’s one going on right now) and apparently one had forced the previous game to be suspended after two innings. (The official media report blamed the suspension on “unplayable field conditions.” Where have I heard that before?) So everyone had been sitting there for an hour and half already. The game I came to see would start a half hour after the first one ended, and would be a 7-inning affair. It was still 93 degrees; maybe an abbreviated contrest was a good thing. 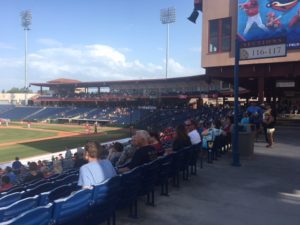 It’s more crowded than it looks. See below.

The official attendance was 5,118 and not one person fewer. Clearwater does boast the highest average attendance in the FSL at around 2,700, but this evening had nearly twice that. I might have attributed the turnout to the unofficial doubleheader, but this was an amazing place to see a game.

I want to move to Clearwater.

I estimate that about 2/3 of the crowd was concentrated around Frenchy’s.

For starters, there was terrific music and sound effects, for everything from mound visits to great defensive plays, and it was neither cheesy nor intrusive. Stuff I’d never heard before. The team shop was about the most well-stocked that I had ever seen. The program was 80 pages thick and full color. Frenchy’s Tiki Hut out behind the left field wall was standing-room-only. Polos outnumbered Ts by a significant margin. I realized, there was serious money in this place.

Virtually all of the great spring training food concessions were open. There was no waiting at the regular concession stands because everyone was on line somewhere else, like at Beers of the World, Tijuana Flats, West Shore Pizza, Abe’s Grouper Nuggets, Gourmet Grilled Cheese Sandwiches and Delcos Steak. It seemed a shame to waste this place on a hot dog. I took a spot as 10th in line at Tijuana Flats and invested my dinner money in a custom-constructed Mexican chicken rice bowl.

Perhaps most notable was there was no on-field family entertainment, at least not while I was there. There were some shirts launched into the stands, but no real interactive games. There was a kids play area, but the other parks had those too. This felt like a spring training game but with about 75 percent of the crowd and about 50 percent of the on field skill. But as far as ballpark experiences go, Clearwater was the class of the FSL so far.

Dog Report: I can’t really rate a dog I did not eat, but I will note that the selection of toppings was nothing out of the ordinary – the standards, plus some jalapeno peppers. In all likelihood, it would have fallen far short of a rating of 20.

One thought on “Foraging for Florida Fandom, Part 4”