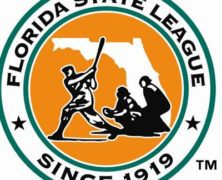 After dropping my wife off at Fort Lauderdale airport at 4:30pm, I zoomed across Alligator Alley to try to make a 6:30pm start time in Fort Myers, on the other side of the state. Exiting I-75, I passed a string of fast food and chain restaurants, and some upscale residential developments on the outskirts of downtown. I would not have been surprised to see a sparse crowd as the temperature at game time was still 90 degrees.

But the parking lot was packed when I arrived at Hammond Stadium and I was directed to a spot close to the exit. It turned out that I had stumbled into a fireworks night. That would explain the $5 parking fee and $10 general admission seats. Parking is free for FSL games in Port St. Lucie and premium box seats top out at only $9 there.

I walked onto the concourse just as the national anthem was being sung. I assumed the disembodied voice was coming from a recording or some talented local at home plate. Instead, I was stunned as I walked past a guy manning the Goodwill table on the third base concourse with a microphone in his hand, reaching for “the rockets red glare.” I had not noticed that some fans had formed a circle around his table and I had walked across the invisible line into his personal performance space. We made eye contact; he grinned and winked. I was forgiven. 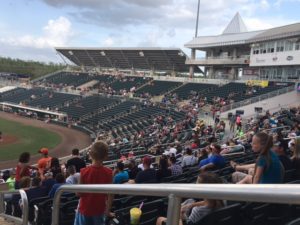 It doesn’t look it, but the official attendance was nearly 4,000.

With my general admission ticket, I took an aisle seat in the highest row behind third base to scope out the crowd. There were nearly 4,000 people here. Fireworks nights will always draw crowds but this was bigger than I had ever seen for the St. Lucie Mets. Admittedly, the Miracle draws the third highest average attendance in the FSL, but 4,000 was still more than double their average gate.

I thought, maybe a better caliber of between-innings family entertainment was driving the attendance. Well, it was typical game fare, but there were a lot of activities. There was a taco dash where a guy in taco suit raced an eight-year-old around the outer periphery of the infield. There was a race between two kids to see who could attire themselves the quickest with a shirt, life preserver, life vest and flippers. Twenty kids gave up their shoes, which were scattered across the left field grass; the first one to find their shoes, put them on and return to the foul line won. Two women competed to slingshot items into a fanny pack worn by their respective partners. Another two women had to toss empty water bottles backwards over their shoulder into a recycling bin held by partner. I’m not sure why the women always had to do the flinging.

These competitions were sponsored by a Mexican restaurant, a dive shop, a shoe store, an outdoor clothing outlet and a recycling company, respectively. It’s tough to criticize the commercialization when I recall back to the entertainment in the Appy League. There, the most popular contest was the toilet seat ring toss.

The first thing you notice in most minor league games is how nice it is not to have commercial TV breaks. The Marauders and Miracle completed the first two full innings in 25 minutes flat.

Prior to my trip, I had reached out to BaseballHQ’s Brent Hershey for some players I should be looking for, but his report on the Fort Myers team was not positive. “Talent is pretty slim here,” he wrote me and listed no players of note. So I was not surprised when the Miracle’s double-play tandem of Sean Miller and Nelson Molina performed a beautiful slow-motion dance to turn a routine 6-4-3 DP into first and second with one out.

But that’s when it got interesting. Before the next pitch was thrown, pitcher Lewis Thorpe spun around and picked off Marauder Alfredo Reyes at second base. Then, he telegraphed an outside pitch to catcher Brian Navaretto, who fired down to first base, catching Casey Hughston leaning the wrong way. Inning over. I guess, if you can’t trust the defense behind you, you have to take matters into your own hands.

Bradenton’s Cole Tucker was in the batters box when all this took place. So, at the beginning of the next inning, he took Thorpe’s first pitch over the left center field fence. It would be the team’s only run in a 7-1 defeat.

I didn’t stay for the fireworks.