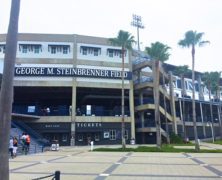 This was my most challenging travel day as I was going to try to catch two games, both with 1:00pm start times and 40 miles apart. I figured I could see the first few innings in Tampa, leave around the fourth inning, then catch the last few innings in Lakeland.

Just over the bridge from Clearwater, Tampa was the stop in the largest population center, so I thought it might also have the potential to draw the largest crowd. Boy, was I wrong.

In a place with such grandeur and Yankee bigness, I was surprised to find free parking and upper deck general admission seats for just $4. Since it was another hot day – albeit “only” 87 degrees – I once again scoped out a seat in the shade. Hmm… Nothing behind home plate. Nothing down either line. Plenty of seats, but not one in the shade. There was virtually no shade at all in this ballpark. I was going to bake.

In Yankees style, the national anthem was big, sung by Robert Merrill and accompanied by the New York Philharmonic. (It was not live, because neither is he.) Merrill’s booming voice echoed loudly, bouncing off every fixed structure in the concrete mausoleum. There was nothing to absorb the sound. You see, fewer than 100 people were there at the opening pitch. I counted. I really did, because I was so stunned to see so few people. 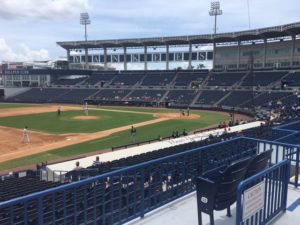 I think the pocket of fans behind the home dugout was one extended family.

The official attendance was laughably listed at 1,093. Since this included season ticket holders, this was a sad reflection on baseball interest in Tampa. The Rays complain about poor attendance in their horrible stadium across the bay, but if Yankee Nation can’t draw 100 fans to a major metropolitan center to see their stars of tomorrow, there is something intrinsically wrong.

I suppose I should not have been completely surprised, though. When I ran BaseballHQ.com, we tested our successful First Pitch Forum program for two years (2005-2006) in the Tampa area, attempting to open up a conference market in Florida. We couldn’t draw 25 attendees either year, even while pairing our efforts with the National Fantasy Baseball Championship in 2006. The NFBC pulled out of Tampa as well.

The apathy seeped into the game, too. Daytona 3Bbaseman, Nick Senzel, who Brent had described as “probably the best prospect you’ll see on this trip,” lined a sharp single to center field with two outs in the first inning. The centerfielder, Jorge Mateo, meandered a few steps over to field the ball, oblivious to the fact that Senzel had quickened his pace after rounding first. Mateo’s rushed throw was way offline and Senzel didn’t even have to slide into second. The game log read, “Nick Senzel doubles on a line drive to center fielder Jorge Mateo.” Mateo is regularly a shortstop, but that was still no excuse.

The first few innings of the game just dragged. There was no entertainment because, well… there were no people to be entertained. The most exciting activity to watch was the handful of kids who were dashing back and forth among the empty seats, chasing every foul ball. It was one of those types of games where, if you didn’t go home with a foul ball, you just weren’t paying attention.

I had to pick up stakes to head to Lakeland before the fourth inning began, with the Yankees up 4-0. As I walked out, I noticed the first semblance of family entertainment on the field – a water balloon toss! About a dozen adults and kids were on the grass behind third base, competing to see who could stay driest the longest. However, it was immediately apparent that nobody wanted to win this game. Over-filled balloons were being hurled with abandon. Everyone was getting drenched… and loving it. It was the most energy I had seen all day. I could just imagine a dad telling his kids…

“We can toss around some water balloons…”

Dog Report: The incongruity of this place continued here. The dog was on a fresh bun (+3) but that was about the nicest thing I could say. It was beefy enough (+4) but pre-wrapped (-2). The only toppings were yellow mustard (+1) and packets of relish (-1). Total: 5. That’s just awful, and not befitting of anything having to do with the history and glory of the New York Yankees.

One thought on “Foraging for Florida Fandom, Part 5”