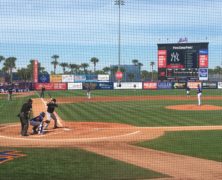 BASEBALL IS BACK!! Our third update, originally scheduled for March 10, will remain postponed to March 17. Our March 24 update will now be scheduled for March 31. As noted in our recent newsletter, we are encouraging private leagues to delay their drafts until the weekend of April 9/10, or later, in order to  capture all the player movement that will occur between now and then. We will publish a final update to the BABS database, spreadsheet and FISH List on Opening Day -- April 7 -- for those who take us up on that recommendation.

Update #2 focuses on game strategy and prospects. We have a few extra articles on Best Ball games, which seem to be a format right in BABS' wheelhouse. And with the official announcement of the designated hitter coming to the National League, we've made a few minor tweaks in the ratings, but BABS' broad ranges accounted for most of them already.

RISK ANALYSIS (Feb. 10)
*BABS' new take on risk
Safest foundation players in 2022
Early risk exposure of each seed in 2022
A quantitative look at 2022 risk
Extreme rosters on the risk scale
Conversations about the new risk costs

LEAGUES ARE ALL FILLED. THANK YOU!
*The BABL Concept