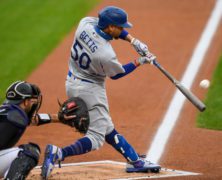 On a Rotisserie earnings basis, Mookie Betts ($45) edges out Aaron Judge ($44) for the most valuable player in baseball. On the pitching side, Corbin Burnes ($31), ekes out a dollar more in earnings over both Shane McClanahan and Justin Verlander (both $30). But in BABS-land, such rankings obscure the fact that there is actually a larger group of players with roughly equivalent value.

Betts and Judge are among a half dozen full-timers who comprise the (P+,A+) asset group pacing the field. Joining them are Paul Goldschmidt, Bryce Harper, Mike Trout and J.D. Martinez. All are stars, and all belong in this class. But also in this group, with less than a third of the plate appearances but with equivalent skill, is William Contreras. Fact or fluke? At this point of the season, the playing time sample is far too small to consider him for real. But it sure is a nice place to start.

On the mound, Burnes and McClanahan are indeed the top two pitchers, both holding the elite (E+,K+) rating. But there are others in that same group. Max Scherzer and Lucas Giolito are not surprises; Aaron Ashby and Cristian Javier might be. And while Verlander earns dollar value equivalent to the top duo, BABS slots him in a lower asset group (E+,KK) with more than a dozen other like-skilled arms. As the innings increase, so will the separation between those who can keep up this level, and those who cannot.

We can’t place a whole lot of credence in these early ratings because the playing time samples are still way too small. In time, we'll gain more confidence in these ratings. The next database update will likely come around the All Star Break.

Click here to access the database. Make sure the year is set to 2022 and the Report Type is set to In-Season Rankings (batter or pitcher). And again, use with caution.