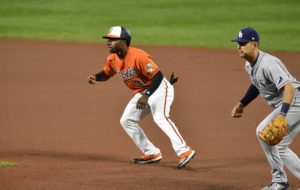 The Player History Scans are accessible from the BABS database page. Simply enter a player’s name in the batter or pitcher box to produce a report containing annual data since 2014 (when this site launched). Each scan contains a player’s basic statistics, along with his end-of-season BABS Asset and Liability ratings. His ADP and average auction value coming into each season is also listed.

A history scan can be useful to ask yourself questions about any type of player. Fully on-board this year? Run a scan. Skeptical of how the market sees a pitcher? Run a scan.

“Ok, we have Blake Snell’s BABS ratings dating back to 2016. So what? It’s just an assessment of how he did, we want predictive value.”

Fair enough. BABS’ draft rating for 2022 is also present, which is informed by the historical ledger. Now comes the fun part.

Snell’s ADP as of this writing is 124. Compare that with how fantasy managers have drafted him in the past. What’s different? What’s similar? From here we can begin to construct the Blake Snell narrative for 2022. What do the assets look like? The liabilities? Any trends in either direction? The narrative is not just what we see on the page. It also includes the news and noise out there in the ether. Ask the questions. Consult the data. Write the story. It might go something like this:

The narrative: Ever since Snell’s Cy Young season of 2018, fantasy drafters have been chasing the dragon. The fire-breathing behemoth has yet to appear again. Well, the fire may be present (K+ is consistent), but the dragon…not so much. Injuries and workload management have worked in tandem to tamp down Snell’s pitching effectiveness. The disappointment is becoming perpetual.

BABS’ take: Chasing the dragon is for addicts. Here at BABS, we are addicted to whiffs. And Snell is one of just 11 starting pitchers who can claim the (K+) asset. Of those 11, he is currently 9th off the board in terms of ADP (124). This is some 80-90 picks later than he has gone in each of the previous three seasons. The skills play (e,K+). The risk (inj-) is palatable, especially if we’re selecting in the triple digits. As of this writing, there are 32 starting pitchers going before Snell. Risk/reward propositions may not get much better than this right here.

Full disclosure: I began conceiving of Snell’s assessment in real time as I was writing this piece. I entered with no preconceived notions other than I know he is a master strikeout artist. I did the research and comparisons to the draft pool as I went along. Which is pretty much how it goes with Player History Scans. We research, we think, we learn. Are we always correct? Don’t make me laugh. But we can use a process and try to trust it. In the final analysis, that’s probably the best we have.

The Cedric Mullins scan is a juicy one. Mullins went essentially undrafted in 2021 and proceeded to put up a first-round caliber season. Wow. What do we do with him now?

The narrative: 30/30 seasons are a fantasy dream. In 2021, Mullins had us all either elated (if we had him) or in feverish nightmares while competing against him. At ADP 29, the market appears to be hedging a bit. If a repeat was expected, he’d be a first round pick. If 2021 was a leveling up, a pick in the late 2nd round might be appropriate. Even with some pullback in statistical output.

BABS’ take: The speed has been there (S+,S+,SB) for the last three seasons. The power came out of nowhere. BABS tagged Mullins as a power liability in ‘19 and ‘20. Surprisingly, his 30 HR in ‘21 didn’t register as an above average asset given the elevated league power in the game today (and the excessive number of plate appearances he needed to reach that level). For ‘22, the liability is gone, but BABS is only marginally sold on the power — his underlying metrics are just barely above average.

Since speed is scarce, and Mullins has the ability, his profile is still worthy of speculation. Multiple projection systems are calling for HR output in the mid-20s range. That, coupled with another season of ~30 stolen bases would be a recipe for another blue-chip season.

This type of analysis is not all that different from other forms of player profiling, with one caveat: We have BABS. Her simplicity allows for quick thinking and fast experimentation. The player pool crystallizes rapidly when BABS is utilized.