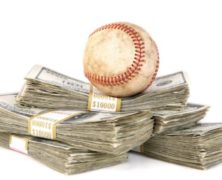 I recently received an email from a respected colleague and industry leader. He asked me, “What are your grievances against Fanduel and DraftKings?”

Several long-time industry friends have asked me similar questions over the past year. I am one of the few fantasy industry veterans who has not fallen into lockstep with a blindly pro-DFS stance. I have been pretty vocal about my opinion in my columns at BaseballHQ.com, and more recently here.

My latest soapbox has targeted the two-headed DFS monster – once again Brangelinized to FanKings – and suggested that my readers play their daily games at any other site. So when I was asked about my specific grudge against the DFS industry leaders, I realized that it was coming from a very deep place.

For starters, let’s acknowledge that FanKings is directly responsible for the currently toxic fantasy industry environment. Dozens of other DFS companies have managed to function without drawing attention to themselves. FanKings is the one (um, two) that has placed the entire industry under the government microscope.

The thing is, DFS is a perfectly acceptable game if structured correctly. But the competition formats that most DFS companies use, led by the FanKings example, create an imbalanced playing field for participants. Multi-entry games, no entry limitations, and the usage of scripts (3rd party or internal, it’s an irrelevant distinction) create a schism between the casual player and grinders. This imbalance – and the fact that many players don’t realize that they are dead money before they even start playing – has generated massive amounts of cash for game operators.

FanKings grew quickly and they lost control. We were all privy to the onslaught of commercial ads last fall. The Fantasy Sports Trade Association (FSTA) warned them about using blatant gambling-related promotional language, but they did so anyway. The FSTA warned DraftKings that their golf tournament game was not in compliance with the Unlawful Internet Gambling Enforcement Act (UIGEA) but they kept running it anyway.

Was it any surprise when the house of cards collapsed last fall? Not to me; I speculated about it six months before it happened. The FanKings-driven collapse has now forced the entire industry into defense mode.

The FSTA is in business to support all fantasy sports companies, but that is difficult to do in a splintering industry. They chose to keep DFS and season-long fantasy together as one entity in their lobbying efforts. Their position is that the only difference between DFS and season-long is the span of time in which the competition takes place. That is simply not true.

Sure, there are plenty of similarities but the key difference is huge and speaks directly to the issue of “skill.” DFS players set their lineup once and then relinquish control of the result. Season-long players manage their roster every week – sometimes every day – constantly working to improve their standing. Unlike in DFS, they are active participants in the success of their team.

Fanduel CEO Nigel Eccles inflamed this argument last fall by publicly stating that DFS requires more skill than season-long fantasy, a point that was echoed by at least one FSTA lobbyist. I viewed this highly antagonistic claim as effectively throwing a 30-year-old industry under a bus. The fallout has been that season-long game companies are now coming under scrutiny where they had not in the past. That is unconscionable.

So the FSTA, backed in good measure by FanKings funding, began a state-by-state effort to lobby on behalf of the industry, with these core goals:

To my mind, the skill versus chance argument is specious. From a logical perspective, most forms of DFS are gambling games, and most pure gambling games require some measure of skill. “Chance” is relative, and a variable that nobody has yet been able to accurately measure. Still, the UIGEA remains the only shield and is worth protecting, however flawed it might be. It has to start somewhere.

FanKings publicly supports “common sense legislation” but this was only after it was foisted upon them. They were in no way pro-active on this issue. And their stance has been more “we won’t stand in the way” rather than being truly supportive of the best interests of the industry.

To wit, the fee structure issue is not one that FanKings cares about. Some states have passed legislation that includes a huge fee to allow DFS companies to do business in that state. Some of these fees are prohibitive for smaller companies, forcing them to pull out of the state. FanKings can well afford these fees so they have not raised objections.

This is an issue where the FSTA and FanKings part ways. Last month, FSTA pulled out of Fantasy Sports For All, a grassroots advocacy website that they had set up in partnership with FanKings. A separate Small Business Fantasy Sports Trade Association (SBFSTA) was also created to protect everyone else’s interests. FanKings has effectively splintered the industry’s trade association.

This past Wednesday, a Congressional subcommittee held a hearing on the legality of daily fantasy sports. FanKings declined the invitation to attend. Rep. Frank Pallone (D-N.J.) asked about the safeguards these companies had in place to prevent their employees from participating in other companies’ games; it was a question that could have been easily addressed by a FanKings rep. Instead, the question went unanswered and FanKings’ absence looked evasive.

Simply, Fanduel and DraftKings have put all fantasy sports companies at risk. This is not an entity that deserves to get fed with more cash, and certainly not mine.

So I will continue to encourage you to play DFS, but on any other site. There are many of them out there. RTSports.com supports Tout Wars. Fanpicks.com offers some unique games. And Betiply.com is a soon-to-be-launched site that may become another favorite. From their website:

ETHICAL DFS: We are the only daily fantasy sports company that limits users to one entry per tournament. That ensures that every player has a fair chance of winning.

In short, find somewhere else to play. There are plenty of options.

4 thoughts on “My Grievances Against Fan-Kings”