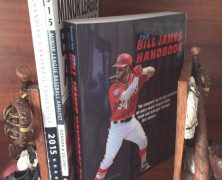 Why I Still Use the Bill James Handbook

In an age when virtually every tiny piece of minutia can be found somewhere on the internet, there are times when you just need a book.

I have been getting The Bill James Handbook (BJH) since well before the turn of the century, back when the cover was red and the publisher was STATS Inc. Since then, the BJH has doubled in size, not only because there are that many more players but because they have added tons of new charts and data that just weren’t available back when Mike Trout was in pre-school.

Most of you probably have already made the leap to this internet thing, but there is no online source out there that can provide the diverse types of data that BJH offers in one place. Really. Not even baseball-reference.com, and that site has a permanent bookmark on my browser. Not even BaseballHQ.com, and that site, well, I invented it. There are a lot of sites that have a lot of data, but BJH is different.

It’s not just the feel of a book in your hands (or the pleasing aroma of fresh ink when you get a copy right off the press line). A book is just more useful sometimes. If I ask you to find me the career statistical record of Adrian Beltre, you’ll have to click over to your chosen site, likely type in at least the beginning of Beltre’s name and finally arrive at his page. While you were expending all that energy and keystrokes, I just flipped over to page 86 with one brush of my thumb.

For much of my own personal research, a book sometimes makes more sense. Just yesterday, I wanted to find some hitters whose home run totals dropped from 2014 to 2015 while their doubles total rose. It was a far more fulfilling expedition traveling through the book, reviewing each candidate’s profile as I went. Had I run an online search, it would have spit out a bunch of names; it might have been quicker but the journey would have been far less insightful.

Also yesterday, I was wondering whether Chris Sale was a good case study to support a pitcher’s ERA woes being tied directly to his team’s shoddy defense. BJH was an easy place to find the wealth of defensive statistics showing how the White Sox ranked near the bottom of all teams in those metrics.

When it comes to ballpark effects, no other source has as detailed a list of indicators, for as many stat categories.

During the World Series, I was getting fed up with the broadcasters mispronouncing the name of my Mets closer. They kept saying JURR-is, but BJH knows that it’s pronounced jeh-REES.

I can not begin to list all the types of data in this book. It’s 600 pages worth, a level of heft which I think might rank ahead of the Baseball Prospectus. Maybe. I was hoping to find a complete table of contents online, but apparently the internet is not big enough to accommodate it. This page at amazon.com at least has comments with a few juicy tidbits.

For me, it’s easier to have the book open on one side of my desk, rather than cluttering up my monitor with yet another browser window.

But as a progressive, computer-savvy guy, I really shouldn’t need this book. I’ve discontinued most of my magazine subscriptions in lieu of their tablet versions. When I want to buy a book, I immediately head over to the Kindle store. In fact, I think the last time I was inside a Barnes & Noble was when I needed a coffee fix.

But, for at least the last five years or so, I’ve only had three items sitting between the bookends above my desk: my Baseball Forecaster, the Minor League Baseball Analyst — both BaseballHQ.com publications — and the Bill James Handbook.

I’ve even posted a photo so you know it’s true.