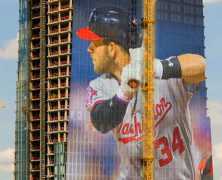 To all my friends:

It’s been a transitional year for me. Back in May, I parted ways with BaseballHQ.com after having founded the site 19 years ago. In June, I decided to pull up stakes at ShandlerPark.com after finding the short-run gaming space too volatile. (And not a day too soon, apparently.)

So, folks have been asking me, “what’s next for Ron Shandler?”

Well, I joined ESPN.com shortly after leaving HQ. You will continue to find me there in 2016. My contract with USA Today still has me fronting the annual Baseball Forecaster book and First Pitch conference events. Beyond that, I decided it was time to go back to my roots.

It makes sense that RonShandler.com would be where it all takes place. Welcome! This is what you will find here: 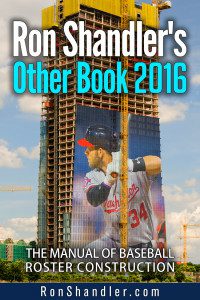 1. A New Book, appropriately called Ron Shandler’s Other Book (RSOB). It uses the Forecaster as a springboard to take a completely different approach to building a winning fantasy baseball roster. RSOB will be released as an e-book next spring, but you’ll be able to get earlier access (beginning in January!), downloadable charts and in-season updates online with a membership here. More info here.

2. Brain Flakes: This site becomes my outlet for commentaries, opinions, rants and my periodic soapbox manifestos. If you want to know my latest opinion about DFS, prognosticating or Carlos Correa as a first-rounder, you’ll find that right here. Recent articles here.

3. Polls: I like to get a pulse on public opinion and this will be your opportunity to weigh in on issues of the day. Right now, I want to know who you’d draft #2 if Mike Trout goes #1. Currently, Paul Goldschmidt has a big lead over three other candidates. That’s not how I would have voted.

4. Rotisserie Baseball Hall of Fame (RHoF), the one place where all players are evaluated on a level playing field. Looking beyond subjective criteria, the RHoF answers a simple question, “Which players had the most impact on our fantasy rosters over the years?” The candidates for 2016 will be revealed next week. The 2016 inductees will be announced in January, shortly before that other Hall announces its picks. More info here.

If you’re new here, make sure you sign up for “Ron’s Hits & Errors” — my periodic e-newsletter — which you will receive most Fridays. If you were previously receiving emails from Shandler Park, you’re already on the list. Becoming a member of this site gets you on the list as well.

What it means to be a member: As noted above, the biggest advantage is that you get far more robust RSOB information — earlier, with downloadable charts and updates into the season. Membership allows you to engage in discussions about each article and help shape the content to your needs. There will also be periodic members-only content.  You can become a member now — I appreciate your support — but be aware  that the premium content will not begin until after the first of the year. (Thank you to those who have already signed up!) At minimum, make sure you’re on the “Ron’s Hits & Errors” list and I’ll email you when things get started.

That’s it for now. Enjoy the off-season; I’ll be in touch.