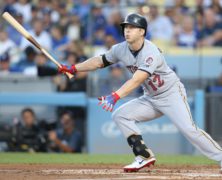 As of this past Sunday, 45 players who had been ranked among the pre-season Top 300 have already visited the Injured List. That’s 15 percent of the top players hobbled in little more than 10 percent of the season.

This is important because the more players who get hurt, the more pointless our pre-season playing time projections become. BABS already projects playing time using very broad strokes – Full-time, Mid-time, Part-time – and it’s possible that those categories are not broad enough.

Full-timers like Daniel Murphy, Miguel Andujar and Corey Dickerson (pictured) are already likely to get downgraded to Mid-time. Mid-timers like Jed Lowrie and Greg Bird might drop to Part-time. And where will that playing time go? Former part-timers who are already seeing an increase in playing time include Rio Ruiz, Christian Walker and Brandon Drury, all of whom already have over 60 AB.

BABS did all she could to prepare us, but all these injuries and role changes have quickly made the pre-season charts moot. So I am going to propose a change to the BABS ranking chart and ask for your input regarding your comfort level with this change.

Up until now, players have been ranked within their asset groups by ADP, but Full-timers were listed first and Mid-timers next. The Part-timers were listed separately down at the bottom of the chart. What I’d like to do is list all players with the same asset profile together.

Typically, ADPs will do a decent job on their own of moving the full-timers up the list, but I deliberately chose this asset group to show that it’s not always the case. In Version 2, the market placed a higher value on Greg Allen, even though our projections questioned his playing time potential. Conversely, we saw greater opportunity for Richie Martin but the market did not place value on that. (To date, Allen has 32 AB and Martin has 50, showing once again that BABS is always right… about playing time anyway. The two have one SB between them.)

It may be helpful to note that some of the BABS part-timers who would have been more visible in the proposed new version include Dan Vogelbach (P+), Eduardo Nunez (s,AV), Rowdy Tellez (p,a), Mitch Garver (p,s), Fernando Tatis (p,s) and Clint Frazier (PW).

The downside to either version of this new presentation is that it will create very large asset group blocks. Those folks who already struggle with seeing lists of players as anything other than straight rankings will likely find more difficulty with this. And the fact that this 17-player asset group with Victor Reyes and Tim LoCastro will be listed ahead of groups with players like Joey Gallo and Carlos Correa will give people conniptions.

But that’s what BABS is all about – sorting better skills profiles ahead of lesser profiles at all stages of the market.

So, what do you think? Let me know in the comments below, or send me a note from the Contact Us page. Do you like one version better than the other? Would you prefer that the reports be kept as they are? If I make the change, I would not roll it out fully until next year. However, if there is a groundswell of positive feedback, I might try to get it implemented with at least some of the in-season reports.

You are the users; it’s your call.

61 thoughts on “Playing time churn could force BABS to change”