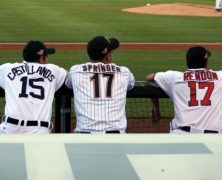 How are these three players together?

I am going to tell you right up front that this article is about First Pitch Arizona, the event that BaseballHQ.com has been running for the past 24 years. If that fact has you lunging to your mouse to click way, I ask you to hold off for just a few minutes.

Many folks have probably heard about First Pitch and immediately thought, “I’m not going to spend all that money to go to Arizona.” I get it. But if you really enjoy this hobby, you owe it to yourself to at least hear me out. I derive no monetary benefit from trying to convince you to attend – I sold the company 10 years ago – but I do try to expose my readers to what I believe to be the best fantasy baseball experiences.

This one is unmatched.

I’d like to give you a personal description of what makes this weekend so special. For everything here, you can check out a formal description at their website.

Although the official program does not start until Friday morning (November 2), most attendees arrive on Thursday for several reasons. First, there are Arizona Fall League ballgames in the afternoon. I’ll go into the ballpark experience in a minute, but suffice to say, most folks want to go to as many games as they can. After all, it’s November, the World Series is over, and the next Mike Trout might be playing. First Pitch attendees got to see both Trout and Bryce Harper in the same outfield in 2013. They got to see slugging third-baseman Albert Pujols before anyone knew how to pronounce his name. This past March, attendees made sure they reserved 2018 roster spots for players like Ronald Acuna, Victor Robles and Max Fried after seeing them at last year’s event.

Thursday evening features the annual welcome reception. This takes place at one of the ballparks – this year at Scottsdale Stadium – and is a “meet and greet” with the speakers and attendees prior to the night game. There are free hors d’oeuvres and a cash bar.

For some, fantasy baseball is a solitary pursuit, either because they can’t find 11 other live bodies to play with, or they prefer the individual, cerebral aspect of the game. Frankly, if I had not made so many friends in the industry, this introvert might fall into the latter camp myself. The nice thing about the welcome reception is that so many different types of people get to connect there. You see every type of fan, from flashy, high-roller players to those who’d rather curl up in a corner with their laptop… and everyone is having a good time. There is a common denominator that trumps all social skills, and that is the game that we play.

At the very minimum, you can always come up to me and introduce yourself. I’m the guy that looks like the photo on our home page, although with a few more grey hairs.

The BaseballHQ.com team packs a ton of activity into every day. There is a free breakfast buffet all three mornings, but get there early as the program sessions begin promptly at 8:00 am.

The main ballroom is where most of the activity take place. When you arrive on Friday, there will be a registration desk manned by several HQ writers where you will pick up your welcome packet. This packet contains lots of stuff that you’ll need for the weekend, like schedules, game tickets, attendee roster, speaker bios and more.

The program kicks off with some welcomes and my introductory comments. I typically run some type of ice-breaker exercise. It’s all very light and casual. Sometimes I’m funny. Sometimes it’s intentional.

The first real session is always the Arizona Fall League scouting report. This multi-media presentation helps identify the players you should be looking for at the ballparks. It’s essentially your player guide for the weekend, presented by Major League scouts so you know you’ll be getting the real inside scoop about these players.

Two of the most popular sessions are on Saturday morning. “Fact or Fluke?” brings eight of the industry’s top writers onto two panels to talk about 2018’s surprise performances. These are riotous sessions as they project player after player on the screen, and the experts have their way with them. I think the reason these sessions work so well is that they provide a great mix of solid analysis and pure theater.

Additional program sessions fill out the rest of each morning – panel discussions, breakout sessions, an open forum Q&A, and even opportunities to have your own fantasy rosters analyzed by the experts. Throughout the weekend, these are presented by some of the leading writers and analysts in the baseball and fantasy baseball industry. I often say that there is nowhere else that you can have access to so many top minds in one place.

Want to try out the daily game? Derek Carty is a leading writer on DFS.

Want to know the secret to winning the big cash? Dave Potts has won millions.

Want to meet some of the SiriusXM personalities you listen to each day? Jeff Erickson, Jeff Mans and Lenny Melnick will be there.

I’m barely touching the surface here. At last count, there are more than 30 speakers signed up so far, not including about a dozen analysts from BaseballHQ.com.

There are scheduled ballgame outings on Thursday evening, Friday afternoon and the Fall Stars game on Saturday night. However, attendees get four tickets in case they arrive early for the Thursday afternoon game, or opt to stay after the weekend.

Most attendees have cars, but you can always find a ride with someone if you need to.

The AFL ballgame experience is probably unlike any you’ve ever encountered. Most games draw fewer than 500 fans, which means we pretty much get our pick of seats. You can grab a seat in the first row behind home plate and be right on top of the action. You can sit a few rows back and look over the shoulder of a scout as he steadies his radar gun. You can sit right behind a dugout and experience the game from the players’ perspective. If you keep a sharp eye, you will probably spot some Major League players or GMs in the stands. It’s casual and accessible, and most people there – scouts, players, GMs – are pretty friendly.

The sparse attendance has other interesting benefits. For one, those sitting in the first few rows can hear much of the talk coming from the field and the dugouts, and it is often funny and colorful. There are some players who will acknowledge intelligent talk from the stands; those who don’t are often equally entertaining. And foul balls, well, they have this saying… “If you don’t go home with a foul ball, you just weren’t paying attention.”

Finally, the players. The AFL boasts a wealth of future talent. How good? Each year’s MLB All-Star Game includes at least two dozen players who were AFL alumni. The final AFL game of the weekend is not just any game – it’s the Fall Stars Game, the AFL equivalent of MLB’s All-Star Game, with the best of the best participating. This contest has more of a real baseball feel as the park is usually filled close to capacity, and the game is covered by the MLB Network. This year’s game is at Surprise Stadium, about 45 minutes away from the hotel.

The photo that appears at the top of this page, and below? That trio of current major leaguers is from the 2012 Fall Stars game! 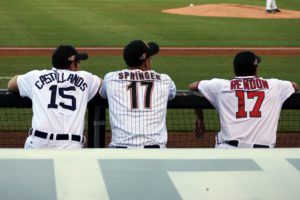 If part of your draft prep includes trying to uncover prospects with star potential, then you cannot afford to ignore this league. It’s an undiscovered treasure. I’ve been scratching my head for years trying to figure out why MLB hasn’t done more to promote it. But their oversight is our incredible good fortune.

Friday night is a live draft night, highlighted by a bunch of different format drafts and auctions. These typically include a few NFBC-style snake drafts, a Scoresheet Baseball simulation league draft and several others. Winners all received a free one-year subscription to BaseballHQ.com.

Kicking off the drafting festivities at 3:00pm is the annual Xperts Fantasy League (XFL) 17th annual auction. The XFL is the industry’s only experts keeper league; the draft is a unique opportunity for attendees to see many familiar industry writers in action. I’ve often said that fantasy drafts are not a spectator sport, but the personalities in this league usually make for a fun experience. And you can feel free to grab any of us during breaks for a short conversation.

Even after all the planned activities are done, First Pitch attendees continue to make their own fun. You won’t have to look hard to find a bunch of guys playing poker in one of the empty conference rooms. Dozens of folks will grab some hotel grub and drink, and hang out at the fire pits by the pool, talking about every conceivable topic. And for those who want to go off-site, Scottsdale and Tempe (home of Arizona State University) are both hopping towns, and both just 10-15 minutes from the hotel.

I really want you to come out to Arizona because I think everyone should experience the rush of this event. However, I know it’s not inexpensive, and many folks have other commitments. Still, if there’s anything in this hobby of ours that is worth the effort to try to do, attending First Pitch Arizona is it. It’s a chance for you to share your passion with over 150 of your closest friends. It’s a chance to take in a few ballgames with the writers whose work you’ve been relying on this season. You simply don’t pass up the opportunity for something like this.

Here are some sneak peaks at what all of this looks like. Unfortunately, they have not posted any recent photo albums on Facebook, but nothing much has changed:

There is an Early Bird Discount that runs through this Wednesday, August 15. If you sign up by then, you can save 40 percent on the cost of registration. That’s $200 in your pocket. Use this link and scroll to the bottom.

What your registration buys you:

When I mention First Pitch Arizona, many of you will just turn off because the idea of traveling to a fantasy conference seems geeky. If you love this hobby like I do – and heck, you’re still reading – you’re one of us. You’ll fit right in. We’re just a bunch of guys – and a few girls – who love to watch and talk baseball. We’re in our 20s, and 50s, and yes, even 80s. And we wear Marlins caps, and Cubs T-shirts and Angels jerseys. They’ll even let you in if you’re a Yankees fan.

It’s an amazing three-day event that will absolutely give you a leg up on the other owners in your leagues.

REGISTER BY THIS WEDNESDAY, AUGUST 15 – SAVE $200 AND SECURE YOUR SEAT!

3 thoughts on “How are these three players together?”