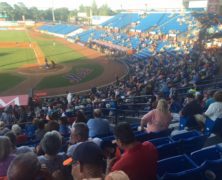 The goal of my journey was an attempt to figure out why First Data Field in Port St. Lucie, FL was a bustling center of activity in March and a cavernous sinkhole in April. Was it just the downgrade from the majors to the minors? Was it the lack of good food and family entertainment? Or are Floridians just terrible baseball fans?

Well, there are elements of truth in all those reasons, but there is more.

The tour was helpful for me to put some things in perspective regarding First Data Field and how the New York and St. Lucie Mets conduct business.

Compared to some of the other Florida stadiums, First Data Field shows its age. The stadium is almost 30 years old and its construction reminds one of Shea Stadium, with narrow crowded concourses. It’s a good place to watch a game – and the family entertainment is nearly as good as anywhere else – but it is a terrible place to stand on line for food. And it’s a terrible place to navigate from the concession stands – through the human gridlock – back to your seat.

Compare it to Clearwater, a newer stadium where there are wide open concourses. But even the older, recently-renovated stadium in Port Charlotte is more fan-friendly. 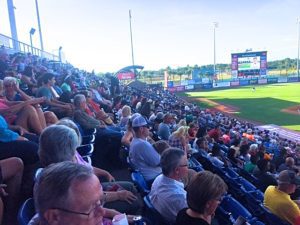 The Mets’ marketing focus is on everything except baseball. I suppose this would make sense when your biggest crowds come out on fireworks nights and $1 beer Thursdays. Back on July 4 this month, the Mets entertained the second largest crowd in the history of the stadium. This was due to the confluence of three elements — fireworks, seniors get in free on Tuesdays, and Tim Tebow. An argument could be made that none of these elements had anything to do with baseball.

The perception that Port St. Lucie is a blue-collar community has been changing over the past few years, yet the Mets continue to appeal to the lowest common denominator of fans. It becomes self-fulfilling. This is no more evident when they broadcast pre-recorded cheering crowds to try to energize the fans during the games. It’s a respect issue, at least for me. I’ll cheer when you give me something to cheer about, not because some unknown crowd noise is being blasted from the P.A. system. For all I know, those are Yankee fans.

But the simplest of marketing tactics seems to completely escape them. The major league Mets often send their injured players to St. Lucie for rehab games, yet you never hear about it until the next day in the newspaper. One would think an advanced note in the local media would bring out the Mets fans in droves.

A friend of mine works security at the stadium and he’ll often text me: “Get your ass down here. Cespedes is playing today.” Or Duda, or Matz, or any number of players that the Mets have sent down here. I’m lucky to have a friend who works security. The other 174,000 Port St. Lucians might not be so lucky.

Given its population, the St. Lucie Mets could be drawing more fans. Of course, their failure is not nearly as bad as Tampa, and I saw that first hand.

On the flipside, I didn’t make it to Daytona on this trip, but I want to see what they are doing to draw the second highest attendance from such a meager population base.

Dog Report: In the end, the fate of Florida fandom might lie in its dogs. The St. Lucie Mets fall far short of representing the great dogs of New York City, the downfall starting with the fact that they are pre-wrapped (-2). A fresh bun (+3) and beefiness (+4) seem to be an FSL staple, so there is nothing special there. And the only toppings are yellow mustard (+1), relish (+1), and if you happen to be at the concessionaire in left field, brown deli mustard (+2). That is the only place in the entire stadium with a Guldens dispenser. Total: 9. Frankly, it’s embarrassing that a Mets affiliate can’t even see fit to offer sauerkraut on their hot dogs.