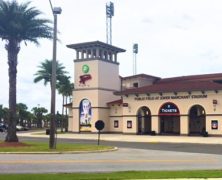 The final stop on my tour was the opposite end of the home-and-home series from the previous night’s game. Driving up I-4, I made good time, arriving just 97 minutes after the first pitch. My goal was to catch the last three or four innings and I expected that I had probably arrived in time for even more.

I found a free parking spot on the grass and was already trying to analyze the decision by some clubs to offer free parking versus those who saw fit to nick me for $3-$5. So far, the only thing I could come up with was The I-75 Theory. Venues west of I-75 were the money-grubbers. Those east of I-75 offered free parking. When I realized that I-75 swings east of Tampa, it blew my theory out of the water. I just thought you’d be interested in my thought process here. It was only a theory.

As I walked up to the ticket counter, there was nobody to be found. I peered though the window glass and the place was deserted. This is not unusual once a game gets into the fifth inning or so, and I’ve often gotten a freebie by arriving late. But I headed over to a nearby security guard just to make sure.

He said, “You sure you want to go in? It’s already the eighth inning.”

I nodded and the guard let me pass.

Yes, it was the top of the 8th and the linescore looked like this:

Jose Tavares was hurling the one-hitter. Brent had described him as “Tons of Ks in Low-A last year, but not projected as one the Phillies’ top SP prospects.” But he was doing pretty well here, with only two walks and 11 strikeouts through seven innings. On the other side, Kyle Funkhouser was mowing them down as well. Between the two starters, they clocked 15.1 innings and struck out 21. 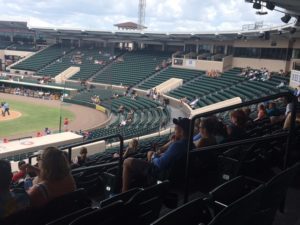 When it comes down to it, it’s all about the shade.

I settled into my free seat in the last row and glanced down at yet another sparse crowd. The official attendance was 1,110 but apparently about 500 of them left before I got there. I did, however, discover a hidden benefit of sparse crowds: when candid shots are posted to the scoreboard, you can do a quick scan of the stadium and immediately locate the people being photographed. It’s a fun way to pass the time.

My arrival was heralded with a flurry of hits, knocking out both starters. As if the FSL gods wanted me to watch at least some baseball, Lakeland tied the game in the bottom of the ninth and sent it into extra frames. I had arrived in time for the best part.

However, I had also arrived too late for any family entertainment. And with one last chance to review a dog, I headed down to the concessions before the 10th inning. On the way, I checked the score of the game I had left. The Yankees had opened up a 12-0 lead; they’d go on to win 15-0. There was no way to know how many water balloons were sacrificed in that quest.

Dog Report: Maybe it was due to the lateness of the game, but my last dog was a pre-wrapped effort taken out of a warmer (-2), leaving it a little rubbery (ugh). It was beefy (+4) and on a fresh bun (+3) with some typical toppings – sauerkraut (+1), relish (+1) and yellow mustard (+1), but also hot sauce (+2) and the long-elusive brown deli mustard (+2)! Yes, it was just a small Gulden’s squeeze bottle, but at least someone was paying attention to what was important. Total: 12.

As I settled into another seat out in right field to enjoy my dog, I checked Facebook on my phone and saw this link: “More Than 200K Pounds of Nathan’s, Curtis Hot Dogs Recalled.” Always the masochist, I clicked through. As I sat chomping on my fourth dog of the weekend, I read about how 210,606 pounds of meat were contaminated with extraneous materials, specifically metal shards. I began chewing a little more deliberately. Nothing crunched.

The Threshers and Flying Tigers graciously gave me four innings of baseball to watch, with the home team winning in the bottom of the 11th. The final line:

The tale wraps up later this week.