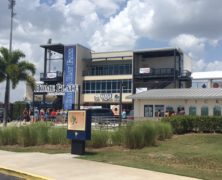 My two stops this day took me to Port Charlotte and Clearwater. These parks were 97 miles apart, but I benefited from a 3:05pm start time for the early game. I figured I could stay for most of that contest before heading north for the 6:15pm game in Clearwater.

Driving up the interstate from Fort Myers to Port Charlotte, the outside temperature reading on my dashboard hit 99 degrees at one point, so I prepared for the worst. Thankfully, by game time the thermometer was a much more “temperate” 93.

Charlotte Sports Park has the feel of an older facility despite having been renovated in 2009. Perhaps it’s the odd configuration of black metal outdoor staircases that look like fire escapes on a tenement building. I felt like I was in one of the sparser Appy League ballparks.

I was surprised to have to pay $4 for parking. (Maybe St. Lucie is the outlier.) I was also surprised that they didn’t offer general admission tickets. The choices were either $11 box seats in the sun, or $10 upper level seats in the shade. That seemed like a no-brainer for this day. I was astounded to see how many hardy souls actually bought seats in the sun, on purpose.

The reported attendance was 3,218 but that was a joke. As I took my seat in the last row, I figured there couldn’t have been more than about 1,000 people there. It wasn’t until I took a food break that I realized where the rest of the people were. There were hundreds of them milling around in the open-air outer concourse, either waiting on line for something cold to drink, or looking for shady spots underneath the grandstand in which to do the drinking. There was a lot of drinking going on. Admittedly, it was perfect beer weather.

The crowd was sparse but incredibly vocal. They had their own unique chants. The popular call-and-response cheer, “AyyOhh, AyyOhh!” here was “AyyOhh, Home Run!” It seemed like every cheer had its own Stone-Crabbian twist, and it seemed to be exceedingly loud for such a small crowd. It wasn’t long before I figured out what was going on. Apparently my seat was in the Screaming Senior Citizens section. There were seven of them, ages 81 to infinity, all season ticket holders. Seven of them. They were the only ones cheering.

There were very few children at this game, and no wonder. The between-innings entertainment was, in a word, lame. After the first inning, some staffers stood on top of the home dugout and tossed T-shirts into the crowd. That’s nothing new, but these slouches couldn’t even take the time to roll up the garments; the shirts barely free-floated past the front row. The next inning, a representative from the Department of Health stood on the dugout and delivered a Public Service Announcement to the crowd, promoting a program to help high-schoolers avoid high risk behavior. That was a winner. The next inning, they dug up two six-year-olds to – once again – stand on top of the dugout. The staffer asked them, “Do you like ice cream?” to which they yelled, “Yes!” and each were given a coupon for a free freeze melt from some local creamery. That was it. They didn’t have to toss something into a bucket, or pick which helmet the ball was under, or guess the secret word. All they had to do was say they liked ice cream. Talk about a skill-based game.

I turned to one of the members of the Screaming Senior Citizens and asked if the “entertainment” ever moved off of the dugout or whether the field was considered sacred ground (you never know so you have to ask). One of the nice ladies responded, “Oh, yes. They usually do a dizzy bat race and lots of other stuff.” In fact, after that game, a helicopter was due to drop 100 pounds of candy onto the field for the kids to scoop up. Looking around, I thought, “Hmm… 100 pounds of candy, divided by about 12 kids….” It was obvious that the helicopter was probably “brought to you by Dr. Manny Fillings, DDS.” 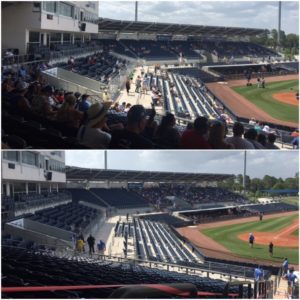 In the bottom of the fourth inning, Jupiter catcher Roy Morales chased a foul ball into the screen behind home plate, and the entire screen came crashing down. The game was delayed while the umpires and stadium officials stood around looking at each other. After about 15 minutes, they announced that all the fans sitting in the sections behind home plate should move to seats down the first and third base lines. One of my male Screaming Senior Citizen friends turned to me and said, “In 75 years of going to baseball games, I have never seen that.” Imagine!

So the fans moved (yes they did – see photographic proof) and still we sat, and we sat. Finally, I decided to get a head start on my 90-minute trip to Clearwater and bid good-bye to my new friends. As I got into my car, I saw the crowd starting to stream out of the park, so I figured that they had finally decided to call the game. The next day, the official media report said that the game was suspended due to “unplayable field conditions,” but nowhere did it ever detail exactly what happened.

As I pulled out of the lot, I wondered about Dr. Fillings and his candy copter. Did anyone ever call him? I could just imagine him hovering over an empty stadium, dumping his cargo and having the grounds crew show up the next morning to face an infield strewn with tootsie rolls.

Dog Report: This was a large beefy (+5), grilled (+5) dog served on a fresh bun (+3), with a slight variation in the selection of toppings – yellow mustard (+1), relish (+1), onions (+1) and jalapeno peppers (+2). Sauerkraut is standard in pretty much every park but it was oddly not offered here. I did enjoy the hot peppers, though. Total: 18.