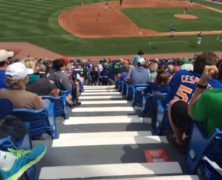 About 10 years ago, I took a tour of the Appalachian League and wrote about it for BaseballHQ.com. Since I had grown up around major league baseball all my life, I always wondered what the spectator experience was like in the minors, and especially in the lowest levels. I envisioned “50-year-old dilapidated ballparks with splintered wood bleachers and mosquitos.” So I took off one weekend to catch a few games and see what it was like.

As it turned out, Appy League ball was more than just bleachers and bugs, but not by much. The range in stadium experiences was very wide. However, now living in Florida – where bugs are bigger and more indigenous – I wondered how the stadium experience in the Sunshine State compared. After all, Florida is not only home to two major league teams and spring training; it is also home to the Florida State League (FSL).

There were three reasons why I wanted to do a repeat tour:

I love minors ball. The Majors are polished and tight. Mental mistakes are few and the range of possible play outcomes is narrow and centered around the mean. In the minors, there is a wider range of player skill. I love to fly blind without a scorecard and try to pick out the future major leaguers from among the chaff. There are always more outlier plays and oddities to enjoy, too.

And from past experience, the fans are often more engaged than in the majors. If you’re taking the time to watch a bunch of minor leaguers, most of whom will never make it to the bigs, you must really want to be there.

Appy League versus FSL: The Appalachian League scrapes the bottom of the class level food chain, with many teams composed of just a bunch of Latin American teenagers. The FSL is two levels higher, with players just one jump away from Double-A ball, the level at which a major league call-up is more possible. How different is the perceivable talent level? How different is the fan experience? I was curious.

The March-April FSL transition: This was perhaps the largest impetus for the trip. Florida ballparks are massive centers of activity during the month of March. Spring training games draw thousands of people from all over the country. But what happens to these places once the Major League season begins?

Living in Port St. Lucie, the Mets’ March home, I get to see the transition first hand. Once the major league Mets head north and the minor league Mets take the field, the stands in First Data Field become mostly devoid of human life. Average attendance drops from 6,900 (96% capacity) to around 1,400 (20%). Those are “official” reported numbers; in reality, they are both inflated thanks to season ticket holders who have little interest in attending 70 minor league ballgames. Most minor league games draw fewer than 1,000 actual bodies.

(Of course, this was all before the arrival of Tim Tebow. If every FSL team could find a former Heisman Trophy winner to try his hand at baseball, then this entire attendance discussion would become moot. Have you purchased your #15 jersey yet? The Mets are counting on it.)

After spring training games are done, most of the good food concessionaires close down, leaving just standard ballpark fare – burgers, dogs, peanuts, popcorn, soda, beer. On a good day, there might be pizza. In March, there are more stands open (naturally) but also a wider variety of foods, including a high-end grill, gourmet subs, taco bowls, barbecue, fancy ice cream and more. Those disappear in April.

And really, the general atmosphere at the park goes from energized to unconscious. Once April games begin, the sound of an outfielder calling for a fly ball will echo through the stands. That is not hyperbole.

I wondered, is this March-April transition as stark at other Florida parks?

So I researched the FSL schedule to find a block of games when I could visit the most parks in the least amount of time. My Appy League adventure took me to five games in 50 hours. My FSL tour would take me to five games in 46 hours, during the weekend of May 19-21. I expected to take in the experience, look at some prospects, grab a few dogs (which I’d naturally be rating) and try to answer the question, “Why are there only 50 people here?”

Over the next two weeks, in Parts 2 to 7, I’ll share a record of my experience.