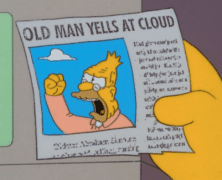 (FREE ARTICLE) Mort lives down the street from me. He is probably in his late 70s, is a huge Yankees fan, reformed gambler (as he describes himself) and has been playing fantasy for about 10 years. Whenever I run into him, he cracks me up; admittedly, I feed him. The following is a composite of several conversations we’ve had over the past few weeks. (Warning: NSFW and some limited paraphrasing.)

Your Mets are crap, you know.

Gimme a break. My Mets actually are better this year than last year.

I’ll give you the pitching but your hitters are for shit. I don’t see a Trout anywhere. No Harper. No superstars. No A-Rod anywhere. Just a bunch of crap.

Tell me there are no Mets hitters you would put on your fantasy team. You still in that league with your grandson?

He’s a good kid. He got 5th pick and switched with me because I didn’t want to wait until 12.

Who dya think? I took Pujols. I always take Pujols.

In the first round? There were so many better players.

How many homers did he hit last year?

How many other players hit 40?

A bunch. And they all had more upside and are younger. Pujols is not going to hit 40 again at his age.

His age??! What’re you fuckin’ talking about? He hit 40 HRs at 35 and suddenly he can’t at 36? What, did he turn into crap after one year? And all these other guys – any of them hit 40 HRs six times in their career?

I’m not drafting a .244 hitter in the first round.

That was one year. He’s done better. Besides, anyone who drafts that Orioles first baseman is taking a chance he hits like crap too.

Davis is not a first-rounder either. Who’d you pass up in the first round? What players got drafted after you?

I’m not gonna draft a guy who did something only once. Anyone can have one great year. Show it to me again.

You have a long memory, for sure. Who else is on your team?

Ha! Does a player have to be a Yankee and over 40 to get onto your team?

Fuck you. Nobody else wanted ’em and there’s not a damn thing wrong with them. These other assholes were climbing over each other for Goldshit and the Rizzo kid, and I’m perfectly happy with Teixeira at first base.

Don’t screw with me. You just don’t know any younger guys.

(Obscene gesture.) I got Cano. I got Yadi at catcher. You got a problem with them? I know plenty of young guys but I’m not going to put them on my team unless I know for sure what they’re going to do.

Fine. Have you stocked your pitching staff with the “aged and infirm” too? I suppose you drafted Bartolo Colon and R.A. Dickey.

A fat Met and an ex-Met? Why the fuck would I do that? I got good pitchers. Everyone was jumping through hoops to get Arrieta – Cy Young, big deal – so I got Lackey. Same team, same offense, he’ll get his wins. Everyone thinks that Seattle Asian guy is washed up, so I took him. Iwa… Iwacrappa, whatever. Nobody wanted Volquez on KC, so I took him too. I took C.C. – why the fuck not? You never know.

Papelbon. They were all sitting around diddling themselves trying to figure out who’s getting the saves on the fuckin’ Rays, so I took someone whose been doing it forever. So what if he messed up the Harper kid. Asshole probably had it coming.

Do you have any underlying strategy for drafting your fantasy team?

I just want guys who know how to play.

Y’know, I like your wife but you’re a son-of-a-bitch. Go home.