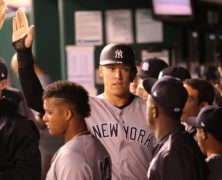 At the All-Star break, Aaron Judge ($43) is the Roto earnings most valuable player, followed by Paul Goldschmidt and Trea Turner (both $39). On the pitching side, Shane McClanahan ($39), Sandy Alcantara ($36) and Justin Verlander ($34) are the only hurlers with earnings over $30. But in BABS-land, such rankings obscure the fact that there is actually a larger group of players with roughly equivalent value.

While rookie Michael Harris (PW,S+,AV) leads all in skills per plate appearance, he's accomplished that in about half the playing time of the regulars. Of the full-timers, Goldschmidt, Yordan Alvarez and Bryce Harper (P+,A+) are the pace-setters in extreme skills, while the leaders in across-the-board skills are Julio Rodriguez and Christopher Morel (PW,S+,a).

There is a sextet of skills leaders on the pitching side. Sharing the elite (E+,K+) asset rating are Corbin Burnes, McClanahan, Dylan Cease, Shohei Ohtani, Spencer Strider and Max Scherzer.

We might expect a few unexpected names to sneak into these upper groups, but for now, other than Harris and Morel, there are no real surprises. Digging a little deeper, we do see a Jeffrey Springs in the same group as Justin Verlander, and Austin Slater ranks pretty high as well.

While we are more than halfway into the 2022 season, we can’t lock in these ratings. Playing time samples are still too small. But we are starting to see how the asset group tiers are shaping up, and by the end of the season, we'll have a fuller view.

Click here to access the database. Make sure the year is set to 2022 and the Report Type is set to In-Season Rankings (batter or pitcher). And again, use carefully.

COMING in late 2022: My new book, "Fantasy Expert" is making progress. Here is an excerpt from the Introduction.