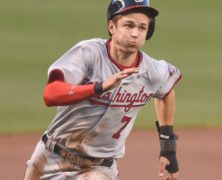 The latest BABS Master List Update is now online in the Members Only CONTROL CENTER.

Our goal in playing this game is to try to find players whose productivity exceeds our investment. Player projections attempt to place a metric on productivity; ADPs and AAVs attempt to show us how others are investing. These two lines of thought are often at odds and tough to reconcile.

One of the great things about the Broad Assessment Balance Sheet (BABS) is her ability to group like-skilled players and show how the marketplace values them. That provides a single-lens view of potential profit.

Here is a case in point. The following three players comprise the (p,SB,AV) asset group:

All three have the same basic skills set – moderate power, significant speed, significant batting effectiveness (our proxy for batting average). Given the wide error bars of statistical volatility, they are all very similar in underlying skill. Despite their similarities, none of them is without some risk.

With less than two full seasons in the majors, Turner (pictured) is an Experience risk, which means the error bar around his projection will be exceedingly wide. He is also a Regression risk after his other-wordly, out-of-character performance last summer. Pollock is an Injury risk coming off a season in which he saw only 46 plate appearances. Dahl is another player with major Experience risk. In most cases, it is your risk assessment, or risk tolerance, that shapes the value you place on players.

In the world of BABS, you have a risk budget, so any of these three could conceivably fit nicely onto your roster. You could justify passing on Turner and taking your profit by waiting for Pollock or Dahl. Remember, all three have essentially the same skills set based on the information we have at the moment.

In a nutshell, that’s how BABS works. There are asset groups of comparable commodities up and down the entire player pool. There are groups of 2 and 3, but also deep groups of 15 and 20… all composed of essentially interchangeable players. BABS will find you reasonable, less expensive alternatives to everyone from Kris Bryant and Buster Posey, to Jake Arrieta and Kyle Schwarber. In fact, Posey was in the same asset group as the less expensive Jonathan Lucroy last year – that worked out pretty well.

So, the immediate impulse would be to identify all these asset groups and target all the lower-ranked players. If you can get a 2nd-rounder in the 6th round, you set that target. If you can pass on a $29 player in lieu of a $18 sleeper, you do that too. The more of these you find, the more profit you can build into your roster. Profit is good.

But that can be a dangerous path.

Taken to its most extreme, you could target all $5 players who would be expected to generate $25 dollars of value. That would yield $575 of value while costing you only $115. Great job! But you have $260 to spend.

Building your roster on draft day is very similar to deciding on your protection list in keeper leagues. You want to have a balance between players who are the best values and players who are just plain valuable.

You need stable players at fair market prices to form your team’s nucleus. The Mike Trouts and Madison Bumgarners are just as important as the pockets of profit that you dig up. There is a simple rating formula I have been using for many years in keeper leagues that puts it in perspective:

Any rating over 20 has to be someone you consider keeping.

So a freeze list with only $11 players expected to earn $20 is not going to get the job done. And a draft roster with only profit chasers is going to fall short as well.

One might think that snake drafts mitigate this problem by forcing you to choose a player in each round. But that’s not what we see.

Whether we recognize it or not, picking Bryce Harper in the first round is a profit-chasing pick. His risk profile would urge caution but that’s not how he’s being drafted. Trea Turner is the same thing.

It would be all well and good if we could guarantee that those chases always pan out, but that’s not the case. Profit-chasing is risky. If we knew for a fact that David Dahl would be worth as much as Trea Turner this year, we’d be paying more for that enhanced certainty. The ADPs provide some level of sanity check even if they are far from exact.

As it turns out, BABS is all about balance – see page 59 in the eBook – and it’s even a part of her name. So go ahead and use her to find pockets of profit. But don’t forget that your roster still needs a solid foundation of stable commodities at fair market prices.

24 thoughts on “Dangers of chasing profit”