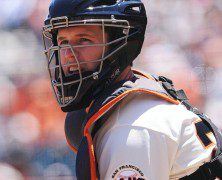 Catchers are the most frustrating offensive position in fantasy baseball. Yes, they offer the shallowest depth of skills, but just how bad is it? Should we really be pushing Buster Posey into the early rounds? How much damage do the end-gamers really cause?

Here is a chart of the Broad Assessment Balance Sheet (BABS) skills ratings by position, indexed to the mean. It measures the asset values of the top 5 and top 15 players at each position (three outfielders, but no middle or corner infielders). League average would be 1.00.

At each position’s top 5, catchers are pretty much in the same ballpark as 2Bmen and shortstops. But expanding the analysis to the top 15 and catcher skill quickly starts to plummet.

This reflects just one catcher per team. Now let’s build it out to a full fantasy roster for a 15-team league, with middle and corner infielders, and two catchers.

Is it any wonder why the industry has been pushing away from two-catcher leagues?

Let’s break down the skills that catchers offer. Guess how many catchers on the BABS list are at least mid-timers (minimum 300 plate appearances) and possess at least one positive asset?

Of those 24 catchers, only 10 are multi-asset players, meaning that they are above average in at least two skills. Given that catchers don’t contribute in speed, we’re talking power and batting effectiveness (our proxy for batting average). Another seven have above average power but are batting average liabilities.

So the big question is, should you overpay for those upper tier bats in order to avoid the cesspool that some owners will undoubtedly end up in? You don’t want the sewer-dweller to be you.

The answer is the same one I’ve been giving for a long time. Don’t overpay or overdraft the cream of the crop because the premium you’ll pay is too high. Posey is being drafted as early as the third round, but his (p,AV) skills profile is in an asset group with players ranging from Hunter Pence and Victor Martinez (ADPs over 200/$5ish bids) to Ryan Braun and Christian Yelich (ADPs in the 50s/high teens bids). Posey is being drafted in the low 30s and going in auctions for just short of $25.

Instead, settle for the middle ground. Even if you have to overpay or overdraft a mid-level catcher, that premium will not be as much as you’d have to pay for the Posey-level players. But do everything you can to avoid the end-game wasteland. Those $1 backstops are not only dead spots, they are downright toxic.

Here are the BABS ratings for the 24 catchers who will provide some positive value to your team:

Complete details about the Broad Assessment Balance Sheet (BABS) can be found in the PDF eBook, “The BABS Project: Uncovering the Truth About Winning at Fantasy Baseball” for only $5. The Kindle version is available at amazon.com. Or, get the eBook for FREE with a one-year membership to RonShandler.com, for $19.95. Here is what you get with your membership.

While Posey and Lucroy are typically the first names off the board, neither has the best skills profile. That honor goes to the new kids in town – Contreras and Sanchez. That is not to say that these youngsters should be drafted first – note the big “EX” on the liabilities side of the ledger – but their skills could lift them to elite levels before long. Perhaps this year. So reaching even slightly on that pair could yield dividends.

Just like last year, Posey and Lucroy have identical (p,AV) asset ratings. Unlike last year, Lucroy has lost his (inj-) nick on the liabilities side. Now they are truly interchangeable commodities. In fact, an argument could be made to push Lucroy slightly ahead based on his more favorable home ballpark.

Looking for a catcher with no major liabilities? There are only eight. So, unless you target that octet in your draft, be prepared to allocate some of your risk budget to this position.

Who are some obvious names missing from this list? While they might end up being drafted higher, the percentage play is to avoid guys like Travis D’Arnaud, James McCann, Francisco Cervelli and Devin Mesoraco. BABS sees no above average skill that you can count on, and tons of potential risk.

However, should you find yourself closed out from positive valued players, remember the adage, “first do no harm.” In catcher terms, that means finding guys who will not get many plate appearances but could provide some positive assets. If you are willing to budget for the injury risk, there are still options like Robinson Chirinos (P+), Nick Hundley (p,a) and Miguel Montero (p,*).

The master BABS list contains ratings for over 100 potential contributors at this position. It is not a pretty sight. Experts advise you not to stare directly at the ratings; they can damage your retinas.

Complete details about the Broad Assessment Balance Sheet (BABS) can be found in the PDF eBook, “The BABS Project: Uncovering the Truth About Winning at Fantasy Baseball” for only $5. The Kindle version is available at amazon.com. Or, get the eBook for FREE with a one-year membership to RonShandler.com, for $19.95. Here is what you get with your membership.