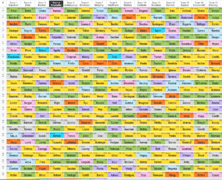 (Draft & Hold) format, with 14 other speakers from the First Pitch Arizona conference. I used the BABS spreadsheet published late last month, although I veered a bit from the plan.

I fully embraced the BABS ratings, but opted to eschew the targets. Instead, I just grabbed the best players as they came up and intuitively decided when it was time to take a pitcher, or another infielder, or some stolen bases. I avoided liabilities like the plague, which got me into trouble last year, but some habits are tough to break. Call me an “expert,” but first call me “human.”

It’s easy to go off-book when you see a high skilled player with lesser playing time. So, in quest of skills, I rostered only 11 full-time hitters, four of them shortstops (though one can play OF). Rostering Kole Calhoun and J.T. Riddle (the 4th shortstop) were my attempts to grab at least some AB. Playing time is fluid, so my 10 mid-timers could edge upward. I hope.

I missed out on the SB studs and had to cobble together a speed game. I grabbed what I could and figured I’d pluck off a few swift end-gamers, but got sniped on Roman Quinn and Rajai Davis late. Amed Rosario better be all that BABS thinks he is.

Now that I’m looking at it, it doesn’t seem like this team is going to do too well in batting average either. But our perception of what constitutes a “good” BA has changed, so maybe I’m okay?

After last year’s debacle, I swore that I’d draft enough starting pitching. At 13 arms deep, I hope that’s enough. Relievers are very skilled; with any luck, they’ll get a bunch of saves.

It is possible for me to roster an active 23 without any appreciable injury risk. Of course, BABS cautions that all players start with 25 percent odds of getting hurt, so my starting 23 would be 75 percent healthy. At least, that’s how it looks as we sit here in February.

The downside of slow drafts is that you (at least, I) get distracted with other stuff and can’t focus on making every pick count. Sticking to the BABS targets for assets would have helped, I suppose (I did fine with my liabilities budget), but I think this team went off the rails pretty early.

What do you think? Here’s my team, first in draft order, and then in positional order. Comments are encouraged.