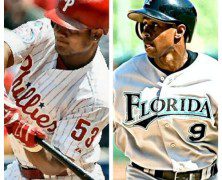 While the the baseball universe waits impatiently for Wednesday’s always-controversial Baseball Writers Association of America (BBWAA) Hall of Fame announcement, the fantasy industry has named its 2016 picks for the Rotisserie Hall of Fame: Bobby Abreu and Juan Pierre.

Unlike the BBWAA, there is no waiting period for Roto Hall induction. If a player meets all the other criteria, he can be inducted as soon as he officially retires. As such, 16 of the 32 players on the current BBWAA ballot are already Roto Hall members.

Here are descriptions of the Roto Hall’s two new members:

Juan Pierre was a speed machine, amassing 614 stolen bases over his 14-year career, and batting over .300 six times. Still, he was mostly under-appreciated on the real baseball field and never hung on for more than three seasons with any one MLB team.

His three years with the Marlins represented his peak, as he batted over .300 during that tenure, with 167 bags, $95 in roto earnings and two of his three Top-15 finishes. He return to south Florida to close out his career for one last season.

The remaining 10 candidates this year all fell short of the Roto Hall benchmarks, some more than others.

This was a class of solid contenders. Those who fell short only did so by the smallest of margins. Torii Hunter never exhibited a strong enough peak period to average $25 or qualify for Top 15 status. Miguel Tejada hung on so long that his latter poor seasons ($5 total earnings over his final three years) brought down his career levels too low to qualify. And Dan Haren had a Hall-of-Fame caliber 5-year stretch (2007-2011) but it was not enough to offset five down seasons at either end of his career.