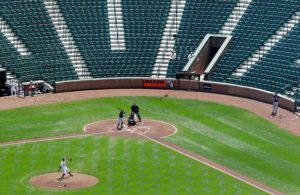 The players and owners may be slothing towards sanity, but fantasy leaguers can’t afford to sit back and wait out the work stoppage. Why?

When it comes to preparing for the fantasy season, there is a more important reason not to wait. Because once the sides reach an agreement, there will likely be a mad rush to Opening Day.

It is important to look back at one of the lessons of the 1994-95 player strike. Once an agreement was reached, there were three weeks of frenzied player movement, with more than 100 players changing teams. Given all the signings and deals prior to the December 2, 2021 shutdown, we may not see anything that frantic, but there will still be some significant movement. There are still free agents yet to find homes, and still many players reportedly on the trading block.

In fact, you can be pretty much assured that there are already talks going on between owners as you read this. Don’t be surprised to see an agreement reached and a player like Matt Olson being traded the very next morning. That’s pretty much what happened in 1995 when — within 48 hours of the agreement — the Expos, Cardinals, Cubs, Yankees and Royals swapped a bushel of players, and 10 free agents found new homes.

With perhaps only a few weeks between an agreement and Opening Day, we’ll be forced to adjust many of our player valuations on the fly, which would affect our rankings. Odds are there will not not be enough time for all those moves to filter into the ADPs in time for our drafts. So it behooves us to have our draft prep foundation in place so we can respond quickly when both sides come to their senses.

You don’t want to be cramming three months of draft prep into three weeks. So plan ahead, lock in your information sources for the season and start prepping NOW. That will give you a head start over everyone else who is waiting it out.

PLAN NOW. Get your head start with a membership to BABSbaseball.com