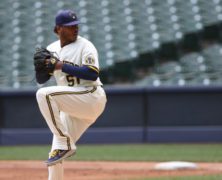 The Broad Assessment Balance Sheet (BABS) is a methodology that integrates skill, risk and the marketplace to create a model for optimal fantasy league roster construction. It is a draft prep tool that embraces the imprecision of statistical projections and shifts the focus to elements of draft planning that have the most impact on success.

There are four parts to the model:

In 2021, BABS had great success in identifying many undervalued talents and breakout performances. Here are two Asset Groups that scored big.

This is the Asset Group from which many BABS followers nabbed Freddy Peralta (pictured). He was being drafted outside the Top 300, mostly because there was not a clear path to a rotation spot on Draft Day (note the “P” under Playing Time). However, his BABS profile was intriguing. Not only was he in the same group as top-liners Giolito and Burnes, but his risk profile was very desirable. Drafting him in a late round or at low cost, even as a speculation, was more than justified just by virtue of his presence in this particular Asset Group.

Giolito ended up returning a loss on most investments, though he was far from a complete bust. But a drafter could have decided not to pay for him, instead absorbing Burnes’ liabilities into their risk budget and rostering a pitcher of comparable skill nearly three rounds later. That’s how profit happens in BABS.

As for Lamet and Paxton, their elevated INJury risk rating should have been enough to scare off most drafters, and both were complete busts.

Skills are like a pyramid. There are few players at the top with extreme skill, but as you tier down, the number of players in each Asset Group increases proportionately. This group includes players typically with low-to-mid 20s home run power, a batting average within a reasonable range of about .260 and non-impactful speed. There was a ton of profit here in 2021. It was also one of the least risky Asset Groups.

Let’s first put Shohei Ohtani aside. While he returned massive profit from this Group, BABS will not even try to take credit for placing him here. He was a unicorn in 2021, and would have been no matter which Asset Group he ended up in.

There are a few other outliers here, but every group will have them. Torres and Conforto were disappointments, though the latter’s negative regression mark was at least a small indicator of that possibility. Santander, Murphy and Walker might have been more in line had they gotten more plate appearances. Their risk factors also colored the possibility of downside.

The other dozen-or-so players are closer fits to the skills profile, though separated by an ADP range of more than 300 positions! You would have done just fine skimming off the top, with Arenado returning fair value, but you could have drafted someone else in the third round and had several other shots at comparable (p,a) talent later on.

BABS was all over Reynolds last March, and liked Aguilar — both were profitable at their ADPs. We didn’t write much about Walsh or Votto, but they were right there in profit territory as well. In fact, nearly everyone outside the top 200 was a positive regression candidate and made bank.

And that’s how it works.