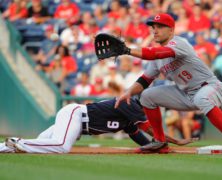 Player projections are irrelevant. What you think players are worth is irrelevant. All that matters is the marketplace. Here is the description that I have used time and time again:

“If you are convinced that a player is worth $25 and land him for $21, you will have overpaid if the rest of your league sees him as no more than a $19 player. Even if he is really worth $30.”

And so it was at the Tout Wars Mixed auction this past weekend in New York City. When Jose Altuve was the first player nominated and went for $49, I immediately knew something was amiss. Altuve went for $42 in 2017 and it would be a tough to argue that he is 17 percent better than last year.

But then Mike Trout went for $56, $5 more than in 2017. Even Mookie Betts – who is coming off a “down” performance as compared to 2016 – went for more than he cost in last year’s draft. I watched as player after player was purchased for more than I expected. My market values – at least in this early stage of the draft – were all wrong.

Based on trends in Major League Baseball’s statistical landscape, early mock drafts and my assessment of my illustrious competitors, I was pretty certain that more roto dollars would be devoted to pitchers this year, and batters would draw less. When the pitchers started coming out, they too were going for big bucks.

Well, when the top players go for high prices, you’d expect that there would some “bargains” later, but at what risk? I did not want a team full of $15 players who’d cost me $10 each. So I jumped in too.

Here is how the previously conservative Touts paid for the top players:

I’m not sure what happened with Goldschmidt (The humidor?). Harper’s high-priced speculations continue to surprise me. And Syndergaard? I have no idea.

But the players haven’t changed. It’s the marketplace that has.

In truth, this year’s prices were much more “accurate” in terms of the imperfect economy of a mixed league auction. We should be buying the best players for top dollar. We should be spending up. The talent at the bottom of the pool is still very useful.

Given the early spending, you would then think we would be left with a ton of $1 players in the end-game. And you would be wrong:

The 2018 Tout Mixed Warriors did a hell of a job drafting this year.

As for me, I went back to the three-tiered approach from last year that bought me a 4th place finish (but one more hit would have moved me into 2nd).

Use the Broad Assessment Balance Sheet (BABS) to draft a few high-end, low risk core players. BABS would help me identify who the best multi-asset, no-liability players are. In my roster below, I’ve labeled these players as (CORE).

Fill in with players on the low end of asset groups that have high upside. This is clearly one of the biggest benefits of BABS, as she can identify where the market is undervaluing skills. BABS arranges players into groups of like assets, ranks the groups, and then sorts the players within each group by their respective market values. The players who are being undervalued just pop right out. I’ve labeled these players as (BABS).

Play for six months. There continues to be a tendency for us to draft as if the current MLB depth charts are fixed, stagnant documents. But the rise in DL days constantly opens up new paths to playing time. MLB teams tend to push the high-end prospects ahead more often these days, too. When we open up our thinking to six months, the perspective changes dramatically. So I will pay for players – usually at a big discount – who might not be fully productive until later in the season. I label these players as (6MOS).

Here is my roster, in order of acquisition cost.

SP – Carlos Carrasco ($28)           F (ER,KK)
(CORE) Starting pitcher scarcity had me willing to pull the trigger on the arm I thought would provide the best foundation – Max Scherzer. But I thought he would go somewhere close to his $34 cost in 2017; I couldn’t make myself say $41. I’m not too disappointed with the $13 savings here.

SP – Zack Godley ($11)                  M (ER,k)
(BABS) Godley pulls up the rear of the asset group led by teammate Greinke. He was on my target list, so I grabbed him; Greinke was not, but I couldn’t pass up that price. Not thrilled with multiple arms from the same rotation, and that humidor better darn well perform as advertised.

RP – Fernando Rodney ($4)          (e,KK,sv-)
(CORE) No, I do not have faith that Rodney will hold down the closer role all year. But I was not going to pay up for risky closers and this $4 investment actually did save 39 games last year. I plan to buy saves as I need them during the year.

OF – Randall Grichuk ($3)              M (P+)
(BABS) Here is yet another extreme power option in the same group as Davis and Zunino. I am accumulating some OBP risk but happy to have banked Votto and Freeman.

MI – Brandon Crawford ($2)        F (a)
(BABS) This spring’s promos trumpeted that Crawford had essentially the same skills profile as Didi Gregorius but could be drafted 220 picks later. Perhaps the market has cooled on Didi because Brandon cost only $6 less.

3B – Yangervis Solarte ($1)          M (AV | INJ)
(BABS) This was a positional flexibility play. For a buck, I’ve got a guy who can cover three positions and might even have some upside with the move to Toronto.

SP – Brad Peacock ($1)                  M (e,k)
(BABS) Ditto here. While Peacock seems buried in the Houston depth chart, Astros starters have spent their fair share of time on the DL. Worst case, he could become another Chad Green, which wouldn’t be horrible.

Rsv – Ryan Madson                         (ER,k,sv-)
(6MO) I probably should have drafted more closer speculations, but there should be plenty available as the season progresses. Besides, Sean Doolittle’s health doesn’t scare anyone.

Rsv – Brandon Woodruff              M (|inj-,EX)
(6MO) I look up and down the Brewers rotation and can’t find anyone who gives me long-term confidence. Woodruff will get his innings.

While there is a bunch of potential profit built into this roster, it is not balanced. I will need speed, and OBP will probably be middle of the pack. I’ve sacrificed current at-bats and innings for future speculations, which can be a reasonable approach, especially since I’ve rostered very little injury risk. But there are tradable assets too. We’ll see.

14 thoughts on “Tout Wars, BABS and the Changing Marketplace”