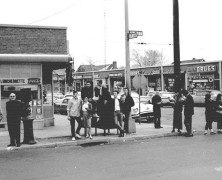 Seymour’s Luncheonette was located on the corner of 164 Street and 69 Avenue in Flushing. It was next door to the Cracker Barrel market and across the street from a strip of stores that included the Royal Deli, Africk Drugs and Homer’s Toys. There were lots of places to hang out for us kids who lived in the apartment buildings across the street, but it was Seymour’s where everyone gravitated.

When you first walked into the store, you were faced with a massive candy counter. And really, that was most of the reason to even go there, at least early on. From the penny Bazooka Joe bubble gum to the Jawbreakers and Dots, you could find anything that your sweet tooth desired… and mostly all for a dime or less.

Past the candy was the lunch counter, which lined the entire wall of the store. There were about a dozen soda fountain stools, which were always occupied by an eclectic group of rumpled blue collars and well-dressed salesmen. I loved to climb onto those maroon leather covers – which were always torn – during those odd times when one was unclaimed. I’d spin, spin, spin, until George behind the counter began barking at me.

This was the home of the most amazing greasy French fries in the world. I used to dream about those oil-dripped brown sticks drenched in ketchup and savoring them as they went down. A lunch of a burger and fries with a vanilla milkshake was pure heaven. But my folks did not have much money and they did not like the clientele that Seymour’s attracted, so my over-fried banquets were rare.

As I got older, my near-daily trips to Seymour’s were spent in another corner of the store.

Across from the candy counter were the magazine racks. I would spend hours there, thumbing through the comic books. First it was Archie, Jughead, Betty and Veronica; when I was about 10, I discovered Sergeant Fury and his Howling Commandos, and then Captain Savage and his Leatherneck Raiders. I loved war comics.

I was a late bloomer when it came to becoming a sports fan and it was the Mets’ 1969 autumn rise that drew me in. But it was my younger brother who turned me on to the vast world of baseball statistics as we watched the games on TV each night. Home runs, batting averages, ERAs – those were the all-powerful metrics that told me how much Cleon Jones was a better hitter than Jerry Grote, and that Gene Michael, Mike Kekich and all the Yankees sucked.

It was the winter of 1971 – a random day in February, I recall – when I went to Seymour’s and noticed that they had started carrying paperback books. This was not a big deal until I caught a glimpse of one title,  “Major League Baseball 1971.”

Hundreds of pages of player descriptions, rosters and cool ballpark graphics with the players’ names at their positions and an outfield wall that accurately depicted the dimensions of their home venue.  The middle of the book had 16 pages of glossy black-and-white photos of action from the playoffs and World Series.

I had to have it. But there was no way I would be able to come up with 95 cents.

Well, my folks were rightly concerned about who I hung out with because smallish store items were never much of an obstacle for us pre-teens in Queens. Whenever we’d catch one of the guys coming out of a store, the opening line was always, “so, what did you cop off with?” And the violator would reach into his pocket to pull out the goods.

Usually, it was just candy, so Seymour’s was a prime hot spot for copping. But sometimes we’d manage bigger items.

I remember one time when my pal Joe and I needed to get a birthday gift for one of our buddies, so we orchestrated a more elaborate plan to come into possession of a scale model World War I Sopwith Camel. Our target was a toy store on Horace Harding Expressway, far enough from our regular haunts so that if we were caught and banned, it would be no big deal. Joe provided a distraction to the cashier while I stealthly wrapped the box in the windbreaker I was carrying. The caper was slick as silk.

With “Major League Baseball 1971,” it was never even a thought to find a way to come up with 95 cents. This should have been an easy cop. But even though the book was only about 5 inches by 7 inches, it was thick and just too big to pocket.

Thankfully it was February, and I owned a garment that was very popular in the early 1970s – a parka. This was the winter coat de rigueur – everybody owned one! –  a navy blue monstrosity with orange lining and a fur hood. But the one feature of this coat that stood out among the rest was its huge pockets with huge flaps. In fact, these pockets measured only slightly more than 5 by 7, making them a custom, albeit snug, fit for my cherished target.

After the initial sighting of “Major League Baseball 1971,” I couldn’t wait to head back to Seymour’s. I chose a time when I knew it would be busy because the magazine rack was a difficult cop; it was directly in the line of sight of whoever was working the register by the candy counter.

I sidled up to the rack and began thumbing through the paperback, my eyes darting back-and-forth out of my peripheral vision. Then I slid the book against the inside of the coat’s arm, where it was narrow enough to disappear from view. Aligning my arm with the open pocket, I let it drop in before positioning the flap closed.

And then I walked home.

I was really stoked at my good fortune and how easy it had been to secure my new property. In fact, I kept going back to the scene of the transgression for future editions. Zander Hollander’s “Compete Book of Baseball” annuals were added to my library over the next few years and I ended up with about a half dozen of these little beauties before I finally got a job and went straight.

If you’re wondering, I only got caught once during my entire copping career. It was stupid because a) it was a trifle candy run, and b) I had just made a similar run a half hour earlier. The cashier called me out on my follow-up visit and chased me out of the store. Thankfully, cashiers turned over every few weeks so it was only a minor setback.

I’m not proud in retelling this story, but I think there must be a statute of limitations after 40-plus years. Seymour’s is long gone and “Major League Baseball 1971” and its offspring have disappeared into the ether as well.

Or so I thought.

Last week, while digging through decades of relics in my basement, I discovered four of my ill-gotten pieces of plunder, including that very first copy of “Major League Baseball 1971.” It was still intact, though the pages had browned a bit. I had stamped my home address and phone number on the title page, as if to say, “This is mine – what’s it to you?”

Probably the funnest part of the discovery was my artwork in the 1973 edition. I was apparently bored with looking at black-and-white photos, so I had meticulously – and accurately – colored in the uniforms for each player.  What else is a 15-year old going to do in the dead of winter?

I was about to toss all these artifacts in the recycling pile when I remembered that there was a tale to tell. And now that I’ve told it, I wondered if anyone else might find value in these books. Who knows?

So I put the loot up on eBay. There is something shameless and maybe a bit daring in trying to re-sell stolen goods, but after four decades, who was going to turn me in?  What’s important is that the books recalled a simpler time when baseball was first dealing with such radical ideas as designated hitters and free-agency.

But there is also the backstory of Seymour’s Luncheonette that will stay with these books forever.