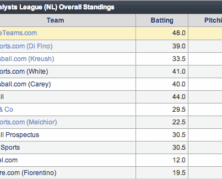 What are the odds of finishing in the money after a slow start?

Over the past week, I have been asked that question twice. “What are the odds of finishing in the money after a slow start? I recall you mentioning the odds in an article at one point, and they weren’t real good.”

No, the odds are not good. But this seems like a good time to re-post an excerpt of the article I wrote back in 2013:

Of the teams that will eventually go on to win their full-season league, 80% of them will finish the month of April in 1st, 2nd, 3rd or 4th place. Expressed otherwise, 80% percent of the time, a league’s eventual winner will already be sitting in a money spot after one month.

This research is from a 2003 article by Scott Wilderman (who now runs OnRoto.com) and Matt Watson in the now-defunct Sports Weekly Fantasy Hot Sheet entitled, “Do I Still Have a Chance? Recovering from a Slow Start.” Within the piece is a table labeled, “% of time eventual winner was in each actual standings place.” Using their commissioner service archives, it charted where the league winners were in the standings on the 1st and 15th of each month during the season.

And they showed that, on average, your league’s eventual winner will already be in a money spot after one month 80% of the time.

A few weeks ago, I received the following email from one of my monthly league participants:

“I have been wondering about your 1-month statistics about winners. I wonder what it would be for two months. The reason I ask is that I also believe one month is too short. It seems that three 2-month leagues per year might be a good compromise. It seems that, in the leagues I was involved in this year, there was a very strong team that emerged after two months.”

Intuitively, the two month time period has always made sense to me too. In fact, I wrote a piece a few years ago that proposed that the major league season (and hence, the fantasy season) should be split into 50-game chunks. We’d take one week off in between each period that would be dedicated to intense analysis (similar to pre-Super Bowl week) and conducting new fantasy drafts.

Fifty games was a time period that made sense to me. As it turns out, after one month those extra games don’t have as much impact as you might think. Here are the stats for the entire season, by month:

The incremental improvement month-to-month after April is tiny, relatively speaking. A good portion of the season is already determined after one month.

In fact, this phenomenon mostly holds even if we look only at the top two spots in the standings:

To reinforce the dramatic implications of these results, let’s flip the analysis and look at how tough it is to come back from a bad start. Here are your odds of winning your league if you are in the bottom third of the standings at the beginning of each month:

Over the years, I’ve heard about and experienced many anecdotal incidences of teams coming back from huge deficits to take league titles. Admittedly, these are isolated outliers. You always remember the one team that storms back. That’s the guy who gets an article written about him. That’s the story we tell to our grandkids.

Nobody remembers the other half dozen stragglers in the same league that failed.

11 thoughts on “What are the odds of finishing in the money after a slow start?”