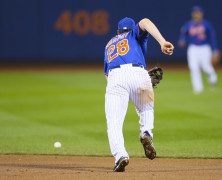 My fandom has been contaminated

Once upon a time, I was a New York Mets fan. I never had to think too hard. I just root, root, rooted for the home team, and immersed myself in the social aspect of fandom. That meant beer, dogs and yelling a lot.

This morning I woke up feeling sick. Yes, my Mets lost the World Series. That stings. But it’s how they lost and the reality behind the entire 2015 season that has my stomach in knots today.

For me, it would have almost been better had the Mets been swept, losing all four games by wide 7-1 margins. Then we could have just said, “Well,the Royals were a much better team. End of story.”

And it also would have been better had they stretched it out and every game was like the first three innings of Game #4 — tight contests with rotating leads. Then we could have just said, “Well, we were evenly matched and gave it our best shot.”

But what the Royals did to my lifelong home team was demoralizing. They embarrassed us and taunted us. They pulled back the thin veneer of faux talent to reveal our soft underbelly. Then they lulled us into a false state of confidence and stood back laughing as our weaknesses rose to the surface. They set us up to beat ourselves, and that is the worst kind of losing.

In retrospect, they made us doubt that we even belonged in the World Series. If just a fan, I would have been content to have made it this far, and while disappointed at the outcome, I would have enjoyed the ride.

But I’m not just a fan. My fandom has been tainted by being a baseball analyst for over 30 years. And as a fantasy leaguer who’s been taught to be painfully objective, I have become jaded and cynical.

Really, the Mets should have never made it this far. This was not a good team.

Back in March, you would have been hard-pressed to find a tout who projected them to grab a wild card spot, let alone win the division and advance deep into October. Their weaknesses were always evident — the bats could not compete at a level comparable to the other top teams in the National League.

Halfway into the season, that expectation was perfectly on target. But with the Washington Nationals and the rest of the Eastern Division floundering, Mets brass decided to take a shot and make some moves at the July 31 trading deadline.

The fact that they landed Yoenis Cespedes was serendipitous. Imagine what the result would have been if the Carlos Gomez trade had stuck!

Analysts attribute the Mets late-season run to several roster additions. Cespedes, for sure. Kelly Johnson and Juan Uribe were useful pieces. Michael Conforto was a nice addition. The return of David Wright was allegedly good for morale, but really, his on-field contribution — 4 HR, 12 RBI, .277 — was hardly game-changing.

All together, it was enough to pull out a division title by seven games over the Nats, even though the Mets lost 11 of their last 18 games to close the season. That late fade coincided exactly with Cespedes’ .218 plummet in his final 55 AB.

The post-season is all about which team has the best three starting pitchers and what batters can get hot. For the Mets, pitching was never a problem. And Daniel Murphy had a run for the ages.

But luck is a pendulum. By the time they had reached the Fall Classic, Murphy had come back to earth, Cespedes continued his late drop off the radar and Terry Collins’ tactical compass failed to make it out of the parking lot. “Overmatched” is not a strong enough word.

What’s worse, despite being a fan since 1969, I had never bought into this team. Back on October 21, I posted this on Facebook:

Call me crazy, but I am having difficulty enjoying my team’s potential World Series appearance. When they won in 1986 and even in 2000, those teams went into the season as contenders. Reaching the World Series was almost expected.

Nobody expected this in 2015. We were supposed to be at least a year or two away, due to a deficient offense. So Mets brass brings in a few marginal pieces that nobody else wanted, and a ringer who has a career year in 2 months and probably won’t be back. Their 2Bman, who I had sitting on my bench for most of the past fantasy season, puts on an unrepeatable power display that will likely only serve to land him a huge contract somewhere else.

In short, this is not the beginnings of a dynasty. In fact, this team might look offensively weaker next March than it did this past March.

And so, I am trying to enjoy this ride while it lasts, but the feeling that any celebration is going to be short-lived has me holding back some of the joy. I can’t bring myself to scream, jump up and down and light fireworks.

So, as this rigidly analytical writer looks ahead to 2016, I don’t share the hopes of my fellow life-long Mets fans. When I hear, “It was a great run; we’ll get ’em next year!” I just don’t see how that’s possible. Cespedes and Murphy will be gone, as will Bartolo Colon, Bobby Parnell, Tyler Clippard and Juan Uribe. No great losses there, but lots of holes to fill.

Normalizing for his short-term streak, Cespedes will go back to being a 25-HR, .260 hitter. Don’t ignore the fact that he has been on four teams in two years; there is usually a reason why a player can’t stick.

Murphy has some nice offensive upside, but some other team will benefit from his potential 20 HRs in a better ballpark. But they’ll also get his sub-par defense.

Travis D’Arnaud has yet to stay healthy for more than 385 AB. Lucas Duda is a streaky hitter with maybe 40-HR upside but he might never reach that because of his .220 BA downside. Dilson Herrera is interesting but unproven, and has a sub-.700 OPS in his first 149 major league ABs. Wilmer Flores is on course to his first 20-HR season, but that will likely be shaped by major defensive shortcomings. (It says a lot that he was one of the better defensive performers in the Series.)

Flores’ cohort is Ruben Tejada, who is Bud Harrelson, a prototypical 1960s all-field no-hit shortstop. That worked 45 years ago; not so much these days when you can’t sacrifice what little offense is available. Similarly, Juan Lagares has been averaging around 400 ABs each of the past three years, which is high for what is essentially a 4th outfielder on most other teams.

Curtis Granderson has hit .260 once in the past seven years; his 40-HR power has disappeared and won’t likely come back at age 34. Michael Conforto is the future face of this team but is likely no more than a 25-HR, .280 guy.

Finally, David Wright has spinal stenosis, which is a degenerative disease. Though it can be managed, most treatments have only short-term benefit. His future performance could well be shaped by pain. Wright has hit 20 HRs only twice in the past seven years and has not seen double-digit power since 2013. That’s not likely to get better. I can see the Mets milking their franchise player until he is a detriment to the team, in much the same way the Yankees handled Derek Jeter in his final season.

But yes, I can hear the loud chorus of “but the pitching!” Yes, this is an incredibly good pitching staff. But that does not mean anything here in November. The Nationals had great pitching coming into this season too. Look how far that got them.

Pitchers are fragile and volatile creatures. The Mets staff is great now, but odds are Matt Harvey, Jacob deGrom, Noah Syndegaard and Steve Matz won’t get through 2016 without some time on the disabled list. Their relative health in 2015 is not projectable; it only means they are that much closer to a DL stint. We probably won’t see Zack Wheeler until some time mid-season. Heck, Syndegaard has not yet undergone his obligatory Tommy John surgery yet.

There is not much hope coming up the pike.

There are no Kris Bryants in the pipeline. No Carlos Correas or Kyle Schwarbers — impact players who hit the ground running. There aren’t even any Byron Buxtons or Joc Pedersons — potential impact bats who are still adjusting to the majors. There is nothing like that in their minor league system, and certainly not far enough along the developmental path to help in 2016.

And I can’t even trust the Mets to make the right off-season moves. It’s very easy to sweep the highly-panned and eventually disastrous Michael Cuddyer signing under the rug after the team’s “successful” year. Oh yeah, did you forget that?

When it comes to the perception of their deep pitching, there continues to be talk about dealing an arm. There are rumors of a potential Matt Harvey for Ryan Braun trade, which would be right in line with the club’s narrow mindset — deal one of the best pitchers in the league for a 31-year-old coming off a minor post-peak resurgence. Forget that his 2015 stat line still pales in comparison to his PED-fueled peak seasons, and that the park effects moving from Milwaukee to CitiField could lop off 20 points of batting average and a half dozen HRs.

You never have enough pitching. I always think about the 2013 Dodgers. They had eight legitimate starting pitchers coming out of camp that year and ended up struggling to find even three healthy arms by the middle of the season.

Of course, you can say this about every team. But when the only real asset a team has is its starting pitchers, there is virtually no margin for error.

So I can’t bring myself to join my fellow Mets fans in celebrating our success — the Royals made that contention look foolish. Instead, I lament the fact that Mets brass will likely take advantage of this false goodwill to continue along their normal ineffective path.

And that makes this Mets fan sad. And jaded and cynical. But also sad.

5 thoughts on “My fandom has been contaminated”