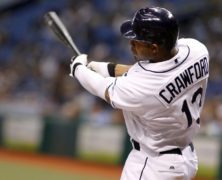 How to Make Enemies and Influence Pennant Races, part 1

The following column, condensed from its original version, was published at BaseballHQ.com in two parts, on June 12 and June 19, 2009. I usually don’t like to dredge up dirty laundry from the past, but… um, heck, who am I kidding? I love to dredge up laundry, wallow in the dirt, use people as my lab rats, and generally act like an ass sometimes. Enjoy.

Long, long ago (last summer), in a land far, far away (my brain), I knew that 2009 was going to be a rebuilding year. I had always gone into each season with some hope of contending, then made the “push or dump” decision once the standings started taking shape. This is how most owners in keeper leagues play the game. But for many owners, I imagine the result is an endless cycle of periodic contention, typically short-term, but mostly spinning wheels. For me, the last year in which I was a legitimate contender in the Fantasy Xperts League (XFL) 15-team mixed keeper league was 2005.

However, the numbers bore out the potential for longer-term, sustained success if I’d make one radical decision. I needed to turn the 2009 season into a sacrificial lamb to the Gods of Future Contention. Going into this season, I’d cut loose all talent that did not have long-term potential and stock up on tons of cheap skill. I’d have one goal, to build a 15-man keeper list so talented – and so cheap – that I could run the board on the major stars at the 2010 draft. The 2009 season would be irrelevant.

I laid out the following draft plan: Protect a small core of Major League keepers with good contracts, build a large reserve of high-ceiling prospects, and go into the draft with the sole purpose of rostering several big-time trading chips. And that’s exactly what I did, coming out of the draft with high-priced superstars Aramis Ramirez, Lance Berkman and Carl Crawford.

But two months into the season, things had not gone exactly as planned. Only one of my three trading chips was holding full value; one was underperforming and the other was on the DL. Even my minor league futures were losing value.

What’s more, the standings stratified early and teams started making that “push or dump” decision in late May, much earlier than I had anticipated. Several “dump trades” went down by Memorial Day, as the potential contenders began setting themselves up for a 4-month stretch run. Yes, it was early, but the longer I held onto my trade bait, the fewer suitors I’d likely have. So the time to start dealing was now.

My goal was to convert the trading chips and several of the on-the-fence keepers into a pared down list of 15-17 firm keepers. I sent out an initial feeler email to the group just to see what came back:

Wow… trading season is in full swing even before Memorial Day. Might as well try to get in on the action. The following players are available: Carl Crawford and Lance Berkman. Looking for low priced, high upside futures, preferably already in the majors. Easy! Have a terrific Memorial Day!

What came back was next to nothing of consequence.

In some leagues, you need to make the decision-making process easier by laying everything out in more detail. Agonizingly explicit, anal-retentive detail is something I do very well. And so, the next email blast looked like this:

To everyone… Thank you to those who made initial offers for Carl Crawford and company. Six XFLers replied, and I was blown away by nearly none of you. I was particularly heartened by how many of you were willing to dig deep to package one single reserve player for the Major League’s top base-stealer. So I am here to sweeten the pot and make this more worth your while.

My goal is to turn a bunch of my players into a smaller bunch of your players, so there will likely be several deals to be made. And there are two terrific packages you can choose from!

[I then detailed two options in the format of “Take 1 from Column A and 1-2 from Column B.”]

If you act now, and make a sweet offer that requires little haggling, I will throw in ONE ADDITIONAL player from the following list, making this a potential 3-for-1 or 4-for-2 deal!

[Full Disclosure: One of the players on this list was Brandon Wood.]

Don’t let this opportunity pass you by. Look over your roster now and consider your options. There are lots of choices, lots of value, and at least a few players who could be the key to a championship for you — this year and/or beyond!

Best wishes for a safe and productive end of May.

This missive was more effective. I received responses from these six teams in the standings: 1st, 3rd, 5th, 8th, 10th and 12th. Here were the offers in the order I received them…

From the 3rd place team: Carlos Quentin and Michael Cuddyer

From the 8th place team: Any two of Todd Helton, Jose Lopez, Kelvim Escobar or Josh Anderson plus any one of Tyler Flowers, Aaron Hicks or Michael Bowden (all farm players).

The 1st place team wrote: “That email is way too complex for my pea-brain. I have interest in Crawford, probably other guys you have too. I have the young studs smart XFL owners crave. Cook me up an offer if you want. If it’s good, I won’t mess around.” So I shot him an offer and he shot it down.

While this was a more productive exercise (one owner wrote, “We didn’t offer the first time, but your new parameters make it easy to see if we qualify.”), the results were still insufficient for my taste. There were only one or two packages even marginally worthy of the impact Carl Crawford could have this year. Also surprising was the participation of so many teams not in contention and the non-participation of several real contenders. For these reasons, I decided that I had to do something more.

Here is where our story veers off into alien territory.

We are accustomed to an open market at the draft table. Once the season begins, however, everyone is given blindfolds, both in FAAB bidding and trading. But what if we took off our masks?

I thought back to when the Texas Rangers overpaid for Alex Rodriguez — essentially bid against themselves — because they did not know who else was chasing A-Rod and what the going rate was. Perhaps an owner armed with some of this knowledge might be able to gauge the market better and make a fairer offer. Doesn’t that stand to reason?

So I made a decision that stepped over the line of fantasy convention and etiquette. I had a fair idea of what the backlash might be, but what the heck. These are my friends. They’d understand. I hoped.

I am going to do something unprecedented in the XFL, and probably fantasy baseball as well. It may piss you all off or perhaps even make me a pariah in the league. But I’m all about trying new things if for no other reason than to see what happens. Don’t hate me too much.

I received a handful of offers from my latest treatise. None of them truly bowled me over, but a few were intriguing. Rather than open up negotiations with any one of you, I’d like to try to fine tune these offers a bit more. But en masse.

What follows is a list of all of the offers I received. For those who made these, you can see exactly where your offer stands. If you think it might fall short given this new information, I encourage you to fine tune and send again. For those who have not made an offer, you can still jump in, and you now know the stakes.

Here are the offers, in the order I received them:

[And then I provided the entire list, in explicit Technicolor detail.]

If you want to hold on your current offer, you need do nothing. If you want to pull it off the table, I’m cool with that – just let me know. And if you want to “fine tune” it, just drop me a note.

Why am I doing this? Because, well, I think enough of you can benefit from having a guy like Crawford, Howard, Berkman, Granderson or A-Ram on your roster that you might want to close a deal.

When it all comes down to it, my goal was to make the contenders see the value of acquiring one of my players, and the risk of lowballing me (by seeing what other teams were interested in making offers). Given that I did not continue negotiations with those who did make offers, it was a signal that the price was potentially going to be higher.

Of course, this group knows each other very well and could decide to call my bluff. They might think that these offers would be the best I’d get. There was one unknown, however. Other owners, including a few in contention, could still join the festivities.

What was the response? Find out on Tuesday, in part 2.

[And in another laboratory experiment, what would happen if I restricted Part 2 to Paid Site Members Only? Flame away!]

3 thoughts on “How to Make Enemies and Influence Pennant Races, part 1”