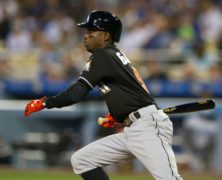 Luck and the law

Some people make their own luck and some have luck thrust upon them. We all resign ourselves to the fact that winning in this game requires a good amount of the “L” word, though there is some disagreement over how much. 25%? 33%? 50%? 75%?

I’ve always felt close to the 33% figure, but the percentage depends upon the rules of your league. If your rules limit roster flexibility, or your ability to react to events in the real game, or reward shorter-term performance, then that 33% percentage could be much higher.

And of course, there is good luck and bad luck. Given that we can only project performance with a maximum of 70% accuracy, there is plenty of room for bad luck to germinate and grow. The Gravity Principle ensures that bad luck is the rule rather than the exception. But first, let’s focus on the good.

Good luck is rare and everyone has more of it than you do. That’s the law.

In those seasons when you receive more than your fair share, you have to take notice and give thanks. It doesn’t happen often. But beyond giving thanks, you must also take stock, because good luck can turn on you at any time.

But for now, give thanks for the events that opened up playing time for players like Tyler Naquin, Noma Mazara, Edwin Nunez, Adam Duvall, and Aledmys Diaz, and the fact that you bid just enough to acquire them.

Give thanks that you decided to hold onto Andrew Miller and Dellin Betances even after the Yankees acquired Aroldis Chapman. Yankees brass insisted all spring that the trio would be kept intact all year, right? And there is not enough space to laud all the new closers after last weekend’s trading frenzy. Jake Barrett – really?

And no, you can’t take credit for Daniel Murphy’s season. Or Jonathan Villar’s. Or Robinson Cano’s. Many of these serendipitous outcomes displayed no skill on your part. So don’t take credit for being on the right side of luck. It was just dumb luck, that’s all.

Of course, there is the flipside. You can’t take credit for good luck but maybe I’ll allow you to blame bad luck for the disappointments.

Like Dee Gordon (pictured), who was supposed to anchor the SB category on my SiriusXM/FSTA experts league team. While I’ve been hanging around 3rd and 4th place, the 20 point gap to the top spot could have been significantly reduced by having those bags accumulating all year.

Gordon’s void was completely unforeseen but can we place equal blame on players who just didn’t show up for 2016? Andrew McCutchen was a high pick; Jose Abreu and Justin Upton were drafted only a little bit later. Until we find the real reason why these types of players disappointed (guaranteed there will be a sore thumb that is only revealed in October), this was all dumb luck too.

I won’t pile on Clayton Kershaw owners. BABS always says that every player starts with a 25% chance of getting hurt, even consistently productive, elite first-rounders. After many years of skirting the odds, Kershaw’s number just happened to be up this year. The current poll on the home page now asks you to place a value on him for 2017. We did this exercise last month for Matt Harvey; I’m curious to see how different the results will be for a more formidable commodity.

Thankfully, BABS softens the impact of luck a little. She could not have foreseen Gordon or Kershaw but she provided many alternatives for less expensive players with skills equivalent to many elite commodities. It’s easier to deal with a Matt Harvey or Chris Archer collapse when there were at least a dozen other pitchers with comparable skills that you could have drafted in the later rounds.

Over the final weeks of the season, there will still be random events that skew the results we expect. Kershaw might come back in September and hurl 40 vintage innings. McCutchen might hit 10 HRs down the stretch. Jose Altuve might hit .240.

And all these small samples will be eaten up by each player’s final seasonal stat line. If a tree falls in Washington and Daniel Murphy hits .220 in September, finishing the season at .335… will we even know?

5 thoughts on “Luck and the law”