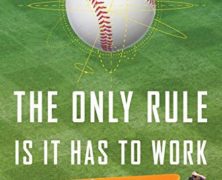 When fantasy baseball started, it was all about control. It was all about the prospect of making better decisions than Major League general managers. It was about being able to pull the on-field strings better than field managers. We were hell-bent on proving that we could assemble a winning ballclub better than the professionals.

Fantasy baseball helped us achieve these goals, albeit in a faux reality sort of way. No matter how proud we are to assemble a team with all of Bryce Harper, Carlos Correa and Clayton Kershaw, we will never really know what type of success these players would have in real life.

I had a slight taste of this back in 2004 when I worked for the Cardinals. As far as I was from the decision-making brain trust, I did see how the gears turned, and was unimpressed. Needless to say, my opinion mattered little; the Cards made it to the World Series that year.

So when I first caught wind of the book, “The Only Rule is it Has to Work: Our Wild Experiment Building a New Kind of Baseball Team,” I was very intrigued. Authors Ben Lindbergh and Sam Miller are Baseball Prospectus guys who had a unique opportunity to put their sabermetric learnings into practice and run a professional team. Finally, we could answer the question, “Can stat geeks run a baseball team better than traditional management?” For fantasy leaguers, this would be the ultimate laboratory!

Well, at least that was the underlying premise.

Lindbergh and Miller leveraged some MLB front office connections to get the chance to guide the Sonoma Stompers, one of four teams in the Pacific Association. This is a lower level independent league, unaffiliated with any Major League organization. While the authors now had a pro team at their ready access, they were not prepared for many of the challenges that awaited them.

For starters, independent leagues are populated by players that nobody else wants. This is not necessarily a bad thing. Theoretically, sabermetric measures should be able to identify the best of that crop, and the authors do manage to sign many of their “spreadsheet gems.” The entire roster-building process is a fascinating read.

Perhaps the biggest challenge was navigating all the strong personalities of the players, field staff and even the opposition. As much as I wanted to see the experiments played out with lab rats, it was often tough getting buy-in on extreme defensive alignments or more logical bullpen usage. But the character development of their often skill-challenged players gives the reader many easy rooting interests.

There were several side stories that added color to the experience. The Stompers gained notoriety during the 2015 season by signing baseball’s first openly gay player. The authors do a great job describing the impact this had in the community and in the clubhouse. And a good minor league yarn would not be complete without an appearance by Jose Canseco.

The authors handled the experience with aplomb, even when the odds seemed stacked against them. But the successes are both on the field and on the written page, and the story is told with great honesty and humor. I highly recommend it. (To order your copy, click the link at the right.)

3 thoughts on “Living the Ultimate Fantasy”