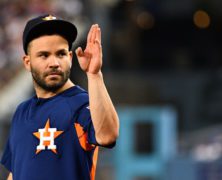 How I Did This Summer

Here’s hoping your 2018 fantasy baseball season has been a success. The final BABS ratings have been posted to the site.

With the completion of the fantasy season, it’s time to look back and see how I fared in 2018.

In fact, 2018 has been a year I would like to forget. It was a baseball season that yielded my worst overall fantasy performances ever. I took losing to new extremes. I’ll be writing about all the losing in depth in the Baseball Forecaster this winter.

Thankfully, BABS was not to blame. She had a good many successes in 2018. For all her unexplainable disses of Jose Altuve’s (pictured) power and Paul Goldschmidt’s speed, she proved to be on target. For those who used the draft spreadsheets to their greatest utility, some of the counterintuitive players that bubbled up to the top had names like J.D. Martinez, Matt Carpenter, Tim Anderson, Michael Brantley, Ozzie Albies and Mallex Smith. BABS provided her usual spot-on draft prep insights.

For me, 2018 was about mental errors, rookie mistakes and distractions. I got cocky on draft day. I took lessons learned about tendencies and drafted as if they were guarantees. I misread the trends and constructed lopsided rosters. It was a mess. I was a mess.

I’m not one to make excuses, but real life got in the way this year as well. I had to take over managing the affairs of my 90something parents when my mother was diagnosed with cancer, then had to deal with the death of my younger brother. For those wondering why I disappeared from media appearances, ended my ESPN writing gig early, and then stopped writing entirely, that’s why.

I was planning to spend the summer working on several book projects, but forward progress on those braked to about 10 mph. I was able to do some of the research, beginning the process of poring through thousands of emails, document files, paper files, magazine and newspaper clippings to figure out exactly what I have. But writing? I did none of that. What you are reading here is the first material I’ve published in months.

So I’d like to put 2018 behind me. But being realistic, my parents are still kicking so I can never guarantee a full return to normality in the short term. What I can promise is that this site will continue to push out valuable content with the focus on your 2019 draft prep needs. Writers Chris Doyle, Pat Cloghessy and several guest analysts helped keep things moving with their excellent BABSian insights in my absence, which confirms my commitment to your success.

If you look over the list of features you get with your annual membership, those will all return in 2019. From my years running BaseballHQ.com, I always tried to add something new each year, but I don’t want to over-promise or under-deliver, so for right now, let’s just go into 2019 with the same solid lineup that helped you in 2018.

In the interim, I will still be spending my fall working on the 33rd edition of the Baseball Forecaster and manning the microphone at First Pitch Arizona. There are some things I can’t be pried away from.

But for now, let’s take this opportunity to take a breath. Hopefully, your home team is still playing this month. Not mine – ha! – but there’s always next year.

19 thoughts on “How I Did This Summer”