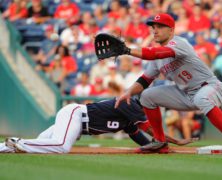 Last year in Tout Wars, several of the participants decided that a conservative approach in these redraft leagues did not get the job done. More often than not, the winner was the owner who drafted the most risky plays that paid off. A report card of surprising “A’s” and “F’s” often bested those with “B’s” and “C’s.”

It got me to thinking that the GBOGH mindset had some value but was not a deliberate, full-out planned strategy. It was something that was half-planned (“I’ll buy Kershaw, Scherzer and Thor, and then fill in.”) or serendipitous (“Oo, Stanton just landed in my lap for $22 after I already bought a $30 Carlos Correa and $20 Kyle Schwarber. I guess it’s GBOGH.”). But what if we planned this all out? Is this something that could work as a deliberate strategy? Could the Broad Assessment Balance Sheet (BABS) help?

I don’t know. But I decided to find out in Tout Wars this past weekend.

Use BABS to draft a few high-end, low risk core players. GBOGH would need a strong foundation to have something to fall back on; BABS would help me identify who the best multi-asset, no-liability players are. In my roster description below, I’ve labeled these players as (CORE).

Start filling in with players on the low end of asset groups that have high upside. This is clearly one of the biggest benefits of BABS, as she can identify where the market is undervaluing skills. BABS arranges players into groups of like assets, ranks the groups, and then sorts the players within each group by their respective market values. The players who are being undervalued just pop right out.

I decided to chase those players specifically. I’d draft from the bottom third of the deepest asset groups, hopefully accumulating some potential profit in the process. I was willing to pay a few dollars above market price for these players because their skills upside merited it. I’ve labeled these players as (BABS).

Play for six months. There continues to be a tendency for us to draft as if the current MLB depth charts are fixed, stagnant documents. When we open up our thinking to six months, the perspective changes dramatically.

For instance, we already know that 40-50 percent of all players are going to hit the DL at some point of the season. If a player’s DL stint happens to start on Opening Day, drafters will discount him – often significantly – even if he will likely be healthy within a month. But we continue to pay full price for players who could just as well hit the DL in, say, July. So grab those discounts!

Similarly, if a high-skilled prospect is a good bet to unseat a shaky incumbent, his draft price is almost always a fraction of what his true value will be. Last year in Tout-AL, I spent $1 on Max Kepler, who started the season in the minors. He ended up earning $8. (I also spent $5 on Jose Berrios, but we won’t talk about that.) Yes, it’s risky, but everything about this game is risky. GBOGH!

From a BABS perspective, this was where I would abandon my risk budget and target players who might be fully productive at some point during the season, but not now. Perhaps I’d be compromising my roster for early season productivity but the goal was to have a team that would be in a much better competitive position later on. Again, it’s a six-month season, a marathon, not a sprint. I’ve labeled these players as (6MOS).

In order to have as many options as possible, I decided to switch to the Tout-Mixed league. Here is my roster, in order of acquisition cost.

CA – Willson Contreras ($15)      M   (PW,AV | EX)
(CORE) I wanted some productive catchers, and when Buster Posey, Jonathan Lucroy and Gary Sanchez went for $28, $22 and $21, respectively, I thought this was a very good buy. With more playing time, Contreras’ assets potentially rise into the group populated with names like Machado, Donaldson and Rizzo.

RP – Jeurys Familia ($11)             P   (ER, K+, SV)
(6MOS) Familia was one of several closers who I suspected might be underpriced because of some uncertainty. I was very happy to get him for $11; not so happy that someone nominated Addison Reed shortly thereafter, who I had hoped to grab in the reserve round.

OF – Ender Inciarte ($10)             F   (SB, AV | INJ)
(BABS) This was my first mistake of the draft. Inciarte brings up the rear of an asset group populated by the more expensive Jean Segura ($18) and Elvis Andrus ($13), so the price was right. But I didn’t need another single-skilled speed guy and those dollars could have been put to much better use later on.

On the flipside, though, Inciarte is my most expensive player with any injury concern. I ended up with six hitters with injury liability, but the fact that all are $10 or under works well for risk mitigation.

RP – Hector Neris ($2)                  P   (ER, K+, sv- | e)
(BABS, 6MOS) Neris’ skill set compares with all the front-line second tier closers, like Osuna, Oh, Kimbrel, Diaz and others. Had I not already rostered Reed, this would have been a solid pick, but I really could not afford to devote another roster spot to chasing more saves. Mistake No. 2. Of course, if he becomes the closer, forget what I just wrote.

OF – Ben Revere ($1)                     M   (SB, AV- | inj-)
(BABS, 6MOS) Into dollar days, I had to toss out players who I’d be willing to eat. Revere (also pictured above) was not optimal for this roster, but it’s a trading league. If he was a full-timer, he’d be in the same asset group as Inciarte above, and after just one down season, it’s tough to give up on those bags just yet. With just Cameron Maybin in front of him – who has one 500-AB season in the past four – and his blistering spring, odds are good Revere will get his ABs. Some team is going to need steals.

OF – Michael Conforto ($1)          M   (P+, a | e)
(BABS, 6MOS) I’ve been writing about Conforto all winter, speculating on all his potential paths to playing time. We haven’t even gotten to Draft Day and a scenario I had not considered is already opening a path – an injury to Juan Lagares. The best part is Conforto’s asset group. If he backs into full-time ABs, or close to it, his value rises into the same group as Khris Davis above.

SS – Franklin Barreto (Res)        P   (s, AV | EX)
(6MOS) Oft-injured Jed Lowrie stands in his way, though the A’s would have to want to promote the 21-year-old. An early read on his skills puts him in the same group as Jose Ramirez, Adam Eaton and perhaps Francisco Lindor. But that is clearly premature.

1B – Rowdy Tellez (Res)               P   (P+,AV* | EX)
(6MOS) Given that I have so much invested in my two first-basemen, it seemed like a good idea to roster a high-upside talent in case one of them goes down. With only weak-batting Justin Smoak in his way, odds are good that Tellez will see the majors at some point. Besides, his asset group puts him right at the top of the BABS draft board. The huge Experience risk mitigates the excitement, but there is a nice skill set here.

While these were the players who came my way, there were others who might have been better (6MOS) fits had I been in position to acquire them. Ian Desmond ($9), Jason Kipnis ($6), David Dahl ($7) and Didi Gregorius (Res) were four injury targets at ridiculous discounts that I would have liked a shot at. Yoan Moncada, Raimel Tapia and Jae-Hyun Hwang were interesting minor league reserves who passed me while I was filling holes. But you can’t have them all, and I’m satisfied with who I ended up with.

The (BABS) players are what this team rides on. All 15 don’t need to return the profit indicated by the upside of their asset groups, but if even six or seven do, this team will rock.