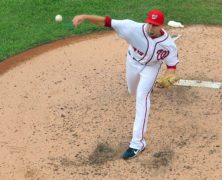 Last week, in the Tout Wars Mixed Auction league, the pearl of the free agent pool was the just-anointed closer for the Washington Nationals, Blake Treinen (pictured). This is a player who would have gone for $15-$20 at the draft had he been named a week sooner. Instead, the Touts spent $5 on the earlier presumptive pick, Shawn Kelley, and $6 on the rumored-on-Draft-Day pick, Koda Glover.

Once Treinen was officially named, nine of the 15 owners opened up their wallets, tossing in a . . .