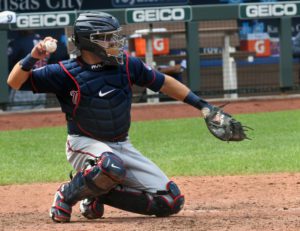 This year’s pool consists of just 27 backstops with positive Rotisserie dollar value. Prudent action suggests not waiting to fill your catching positions in a two-catcher league.

Compared to 2021, there are seven catchers projected for more than 500+ PA versus only two from last year. Mid-time catchers in 2022 are likewise more plentiful (26) compared to 2021 (20), and the number of part-timers remains almost identical in both years (about 25 players). So, you will have choices to complete your roster.

Power remains plentiful in this group (about 30 players) but over 60 percent carry the (-A) skill liability. As one might expect, only four carry any speed rating. But batting effectiveness – a proxy for batting average – is found in 18 players.

The batting skill liability is somewhat common throughout the position. Around 50 percent of catchers have an injury liability, roughly the same as the general batter pool. And the experience liability is not uncommon within the group. In all, this is a high-risk position — of the 64 names on this list, only nine have a risk cost of $1.00 or less. Take that into consideration when planning your risk budget.

Two interesting plays in the full-time group do exist – how would you like to draft a Salvador Perez-caliber skill set, but over 10 rounds later? Look no further than Mitch Garver (pictured) – who owns the same dual skill combo (P+,a).

Triple-asset players at any position are incredibly valuable, which is the reason JT Realmuto (p,s,a) is so sought-after. However, look for Daulton Varsho (p,SB,a) several rounds later with more speed – plus he carries multi-position flexibility in the outfield.

All full-timers carry at least one asset except Jacob Stallings, but his PT alone — sans skills liabilities — does have value.

Power is the keyword in this sub-group as almost half of the players carry some element of this asset. Yasmani Grandal (P+) could be a poster child for this skill set. Given his age and injury history, he could also see more time at DH/1B, which might give us one more year of plus power.

An interesting choice could be Danny Jansen (p,a), one of two catchers who possess dual assets – along with early-round pick, Will Smith (P+,a). Jansen posted a very strong second half in 2021 after overcoming some early season injuries, and he plays in a very strong lineup – not bad for a very late-round pick.

Orioles rookie Adley Rutschman opens his career with just a single (a) skill asset. No power here (yet?), but he appears to have been handed the keys to the position already – he has been near the top of prospect lists for several years now and is a name to keep in mind.

Of the 26 catchers in this group, only one has dual skills – Yan Gomes (p,a). Although he is listed as the No. 2, these skills suggest he could add value to your team, and he doesn’t carry many liabilities.

Avoiding the dreaded skill liability of (-A), or worse yet (-PA), could be a goal in searching this group and Luis Torrens (p) could fit the bill. He should garner enough PT to provide some help and he also doesn’t come with much in the way of other liabilities. And Kevin Plawecki (a) also falls in the category of “do no harm.”

This category is best suited for very deep leagues or draft-and-hold leagues. But two veterans that bear mentioning are Jason Castro (P+|-A) and Kurt Suzuki (a), each of whom should garner around 100 PAs and could provide a handful of counting stats.

Connor Wong (p,s|-A) is the only dual skill player in this group and could eke out some PT. Perhaps the most promising player is MJ Melendez ( ), who has the misfortune to be in a system that features the No. 1-rated catcher. However, his bat may force the club’s hand to find him another position.

NOTES: The chart above may vary slightly from the latest database update which was run after this analysis was written. To engage with other readers on this topic, head over to the Reader Forums. If you have a question that would be best answered by one of our experts and benefit everyone, submit it on our Contact Page and put MAILBAG in the Subject Line.