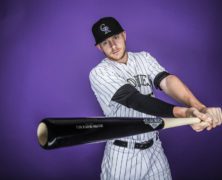 Oh, the halfway point.  That sweet (arbitrary) line allowing us to refer back to this season’s 1st half or 2nd half. More importantly, it’s time to reveal the BABS All-Stars!

This list will not address the Freddie Freemans and Nolan Arenados.  We are more interested in the black swan types. Guys who seemingly emerged from the mist to help  carry owners to fantasy supremacy.

Let’s dispense with the pleasantries, and get right to it.

Normally a position awash with talent and run production, this season has forced many of us to the waiver wire.  With luck, your FAAB dollars may have garnered…

The savior of many fantasy teams, Jesus Aguilar (P+,A+) has powered his way to the top of HR leaderboards.  BABS is thoroughly impressed. Hard to believe anyone saw this coming. Aguilar’s NFBC ADP was 478! We should note that BABS liked his power (P+) at draft time.

Brandon Belt’s ADP (301) was flummoxing.  We knew (thanks BABS) he was one of the juiciest late round targets in the draft (P+,a). Belt’s half-season (PW,s,AV) has been backed by healthy counting stats.  With physical health, he should continue to produce.

Maybe the most exciting player in baseball, has Javier Baez (PW,S+,AV) finally unlocked his immense talent? BABS certainly thinks so.  El Mago is angling to pull off his greatest trick yet, a first round return on an ADP 105 investment.  If BABS and Javy himself are to be believed, expect more of the same in the second half.

The name Gleyber Torres (PW,AV) might make forgetful Cubs fans cringe. He has made many fantasy owners gleeful.  The Torres hype train arrived in The Bronx and has been a runaway success.  Gleyber’s 328 ADP was indicative of his playing time uncertainty, not his talent. Those who were able to draft and hold have been handsomely rewarded.

At 34 years old, Jed is not dead, baby. Mr. Lowrie (p,AV) has found the fountain of youth, and in it was power! At press time, Lowrie (ADP 429) already equaled his career high with 16 HR. BABS and yours truly are proud place the honorific after his name: Jed Lowrie, BABS All-Star.

Late round hits don’t get much better than 2018’s Eugenio Suarez (ADP 186).  Despite missing two weeks in April, Suarez (PW,s,AV) leads the NL in RBI. He has continued his year over year skills consolidation by improving his contact rate and power indicators. The .300 BA is new and skill-supported.

The youth movement in The Bronx has many faces (see above). Miguel Andujar (p,s,AV) has flashed skills good enough to relegate MLB veterans Neil Walker and Brandon Drury to bench roles. Rookies can be difficult to trust, but BABS thinks Miguel has a chance to continue his success.

Charlie Blackmon and Nolan Arenado were top 10 picks.  They play at Coors Field. Why was Trevor Story (P+,s,a) all the way down at ADP 113? Recency bias.  There can be no other explanation. Safe to say BABS and every fantasy owner will be targeting Trevor (pitctured) early and often next season. Good chance if Story is your starting SS you are sitting pretty in the standings.

Long a wizard with the glove, Brandon Crawford’s (p,A+) bat has been equal to his defensive excellence.  Crawford (ADP 365) has ridden a jump in line drive rate to a career high BABIP, thus elevating his BA. Injuries and ineffectiveness thinned an already shallow position, and Brandon was there to provide a soft landing.  Steady, boring production is an undervalued asset.

After the Braves dumped his salary in the off-season, Matt Kemp (PW,AV) was seemingly left for dead (ADP 305). Kemp did some dumping of his own, as in a ton of weight. Matt can thank a BABIP reminiscent of his salad days in the early twenty-teens for his BA surge.  Though a recent slump may have dulled his luster, BABS sees enough to award Kemp a spot.

Those who saw this know that no BABS All-Star team would be complete without Brandon Nimmo (PW,S+,a).  Brandon’s skills translate into BABS assets approximating a poor man’s Betts, Pollock or Benintendi.  Nimmo is set to play plenty in the 2nd hal. If BABS is right, his counting stats should follow.

Some of us were worried after a rough first month.  Eddie Rosario (PW,AV) put those worries to sleep with a tremendous May-June run.  A two-month OPS over a thousand to go along with 15 HR, 40 RBI and 4 SB. Presently a $30 player, Rosario (ADP 125) has earned his way to the top of every fantasy outfield.  Keep riding him.

I recently wrote about pitchers.  So, from the Department of Redundancy Department, here are your BABS All-Stars from the pitching ranks.

If I did not cover your favorite pitcher, Chris Doyle certainly did.

Come this weekend, the first half will be officially behind us.  The dog days are coming. BABS will come with updates to see us through.