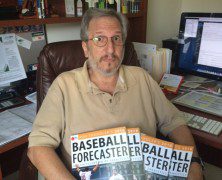 I joke with others that my biggest fear is that my tombstone epitaph will read, “Fantasy Baseball Expert.” If that is how my life’s work will be encapsulated, then I must have done something wrong. But the fact remains: the Baseball Forecaster celebrates its 30th Anniversary edition with its release this week. And as I turn 58 tomorrow, the book reminds me that this work has taken up more than half my life.

I put a lot of effort into this year’s introduction (entitled, “Segue”) and it reveals some important truths about where we are relative to 30 years ago, and how we need to change our way of thinking. I get a little nostalgic too. Here is an excerpt.

(You can order the 2016 Ron Shandler’s Baseball Forecaster now.)

I am sitting at a large table in a small house located just outside the Inner Loop. I am surrounded by 3,000 in-laws of all shapes and sizes. There are old ones and young ones, large ones in both size and presence, vegetarians and carnivores. New Yorkers, and Coloradans, and Floridians, and one or two Astros fans. There are only two decibel levels—loud and louder.

I have been married for eight months.

I am invisible, mostly because I believe that communication should be thoughtful and measured, not driven with a jack- hammer. I don’t know what the heck all these people are talking about anyway. Who are these people? I think I’ve made a huge mistake.

So I wander off in my head, recalling the disappointing results of my first Rotisserie Baseball league. A bunch of high school teachers, a psychologist, a tech executive and I were dipping our toes in the Roto waters, drafting players out of each league’s Eastern Divisions. I finished fourth, led by Dave Stieb of the Toronto Blue Jays and his league-leading 2.48 ERA. Fourth place wouldn’t have been so bad had there been more than six teams.

I had to do better.

“Ron? Ron?? Did you hear me? Wouldja pass the potatoes?”

No, I didn’t hear you, dammit. How can anyone hear anything? Where’s my bag?

Those books I brought to read on the plane… the Bill James Abstract, The Hidden Game of Baseball, How Life Imitates the World Series. Would anyone miss me if I slinked away? I am convinced that the answer to winning this Rotisserie thing is hidden somewhere inside those three books. But Bill James, Pete Palmer and Thomas Boswell all have different measures to evaluate talent. Which one is best—runs created, linear weights or total average?

It would be pretty valuable to see all the players listed with those three “new statistics” presented side-by-side-by-side. Hmm.

There is plenty of time to think; I am unemployed. I just completed the worst 15 months of my career, taking a job in a New Hampshire bank as my ticket out of New York City traffic. This is my third forced job departure in the seven years since graduating from college. There would be three more unceremonious exits before I’d finally tell Corporate America where they could put their pink slips. It took me awhile to figure out that I was not cut out to be an employee.

I figure, what the heck, I’ll just write a book. How hard could it be? I had worked for publishing companies before. I had learned how to do direct marketing. I was a good writer and a magician with LOTUS 1-2-3. And I was a control freak.