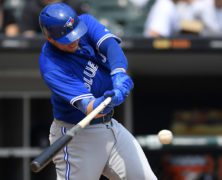 Using risk to your advantage on draft day

This is my weekly article from ESPN Insider.

During the course of his career, Edwin Encarnacion has had a pre-draft ADP in the Top 15 only once, slotting in at No. 10 in 2015. He has earned first round value only once as well, pulling up the bottom at No. 15 in 2012. Yet Encarnacion is always near the top of our draft boards. Perhaps he might be considered as having peaked as a second-rounder (not that there's anything wrong with that).

His ranking has been in decline since moving to Cleveland, and . . .