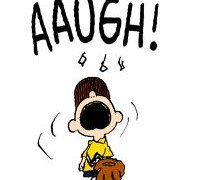 I’ve finally figured out why I will probably never play daily fantasy on a regular basis. It’s a legal issue. If I played regularly, I would likely end up in jail.

After playing full-season fantasy baseball for 30 years, I hold a deep passion for the game. When I play, it’s never casual. I put in an inordinate amount of time and effort to prepare. I am always fully invested in following my team. And everything hinges on the outcomes.

At face value, that doesn’t seem like such a bad thing.

I dabbled in the daily game last year. Won a few, lost a few. It was always, “I’ve got a few minutes, so let me throw together a team for tonight.” But then Tout Wars cut a deal with Fanduel to run a daily experts competition. Now it wouldn’t be just a few bucks on the line; now it would be pride.

In Tout Wars Daily, we all play on Fridays in four-week groups. Then the high point totals earn the right for a championship tournament in August. Fanduel put up a bunch of cash to keep things interesting. The top ten finishers share in each week’s pot.

To say the least, it has been humbling. The touts are a tough crowd to begin with, but it seems like some of them have deciphered the secret daily code. Each week’s winner easily eclipses 50 points. Through my first few tries, I was still trying to get past 35.

Admittedly, I may not have been putting in enough time. So this past Friday, I blocked off my afternoon and settled in to assemble a Shandler-worthy effort.

My Five Stages of Prep:
1. Exhaustive research
2. Narrowing the field
3. Selecting a core lineup
4. Filling in with speculative upside
5. Tweaking, then tweaking again

I won’t go into the gory details, but my core lineup started with Gerrit Cole on the mound, going up against my home team Mets. Might as well toss out my fan loyalty right at the beginning.

My outfield would be Carlos Gomez, Starling Marte and Norichika Aoki (a slight edge over Denard Span). I really wanted to find a way to get Bryce Harper in there; I’m sure that’s a wish also held by 29 Major League clubs. It wasn’t going to happen.

The left side of my infield was Seattle’s Kyle Seager and Brad Miller, both at sub-$3000 prices. With the Mariners facing Toronto’s gopherball-challenged Marco Estrada, I surmised that Seager’s flyball tendencies might play well in the Rogers Centre. Miller is constantly underappreciated and was coming into the game having batted .387 over his previous nine contests.

That got me through the first three steps of my process. All I had left was to find a catcher and first baseman for my speculative upside picks.

My backstop candidates were Colorado’s Nick Hundley and Seattle’s Welington Castillo. Hundley would join already-rostered Aoki in a Coors Field game that looked like it could be a slugfest. But Castillo had several factors going in his favor:

I was not happy rostering three Mariners, but I could always tweak things later.

My first base candidates were an interesting pair. I have been intrigued by Miami’s Justin Bour. This was a mid-level prospect with moderate power upside who was getting on base at a near-.500 clip through his first 35 at-bats. This night, he’d have a rare start, batting fifth, and facing Baltimore’s Ubaldo Jimenez. Yes, the Orioles’ starter was having a nice stretch, but it never lasts.

My other candidate was the Cardinals’ Matt Adams, who had two factors in his favor:

1. He had a longer track record than Bour.
2. He was a lefty flyball hitter facing a finesse flyball righty in Chris Young.

Granted, it was not a huge difference, and Adams was $200 more pricey at $2500, but it was enough to tip the scales. I opted for Adams.

I proceeded to spend a good amount of time on step 5 but ended up right back where I started. No matter what I did, it never seemed to be an optimal lineup, only a “good enough” lineup. If I had the time, I would have continued to tinker. But I had plans to go to the Salem Red Sox minor league game at 7:05pm and it was already 6:30.

I suppose the easiest time to get distracted at a ballgame is during a pitchers duel. So while the Sox and Winston-Salem Dash put up six innings of goose eggs – Salem’s Aaron Wilkerson was brilliant – I was transfixed by the Fanduel icon on my iPhone. At first, I was checking the results about every 10 minutes. But then the unthinkable occurred.

Cole was mowing down my Mets, Gordon was stealing bases in bunches and suddenly I was in first place. I responded by doing what any other reasonable daily game player would do:

I started checking my phone every 30 seconds.

Thankfully, my stay atop the standings was short-lived and I spent the next few hours hovering between fifth and seventh place. This gave me license to roll back my phone-checks to every two minutes.

Apparently, the Dash scored two runs in the top of the seventh. I think.

My speculative plays were running hot and cold. Castillo had a single, a walk and a run scored. Adams, well… I cringed each time he got up to bat and excised a quarter of a point from my bottom line. Five times.

And with these outs, and the rising tide of late night games in which I had no stake, my squad sunk further and further in the standings. Eventually, we slipped out of the top 10.

I finished with 42.8 points, good enough for 13th place, just three spots from the money. While disappointing, it was an improvement and my best showing yet.

Before I closed up for the night, I reminded myself to take a quick check of some of the players I had passed over.

You should never do this.

I was okay with the variable fractions of points I would have gained or lost with guys like Hundley and Span. Yes, I passed on Harper and his 16th home run, but I can’t afford a Lamborghini either; you just come to terms with your own limitations.

And then I checked the Miami game.

Justin Bour went 2 for 5 with a home run.

At the point when I made the decision, the choice between Bour and Adams was almost a coin flip. In the end, Adams was slightly more justifiable. It was also wrong. Opting for the Cardinals’ first baseman over Bour cost me 7.5 points, a difference that would have vaulted me up to sixth place. That finish would have made me flush with enough new cash to buy three New York City lattes.

Yes, yes, I know I should just let it roll off my shoulders and play another day but it’s not that easy. Every time I lose, there is a mourning period for all the effort gone to waste. At first, I can’t believe that it happened and want to be left alone. Then I lash out in anger.  I obsess over what I could have done differently and then just sink into a deep, deep depression.

Finally, I kill something. (Stage 5: Acceptance)

The wins are exhilarating. They validate the effort and dispel any doubts that this is a game of chance. It’s never a game of chance when you win. But the high is short-lived. Losing stays with you longer.

And all this with a game where I had no money on the line.

That’s why I could never play this game regularly. I am too passionate and invested with every aspect of the competition.  I am an at-risk player. At risk of a blown gasket or committing atrocities against innocent communication devices.

But all this intense introspection leaves just one final question:

What are the match-ups tonight?