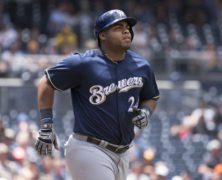 With the bulk of the 2018 fantasy season in the rearview mirror, you’re likely in one of two camps: competing for a title or throwing in the towel.

(There’s also a purgatory where you realistically don’t have a chance at winning but aren’t near the bottom either. Let’s hope you’re not there. There’s nothing worse than mediocrity.)

We’re all too familiar with the players that will be going high in next spring’s drafts, but there are some interesting names that have popped up in the latest BABS update . . .