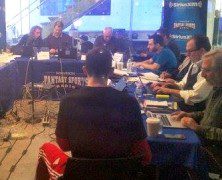 AL/NL-only leagues are incredibly challenging, moreso today than when they were first introduced in 1984. The burgeoning disabled list, platooning and incessant roster turnover have diminished the importance of Draft Day. In redraft leagues, it’s particularly difficult to achieve an optimal roster structure. And if just one owner employs a strategy that skews the auction economics, it can be a very trying draft.

But I’m not trying to make excuses.

My Tout Wars-AL draft was actually the least stressful I’ve ever participated in. Thanks to the Broad Assessment Balance Sheet (BABS), I didn’t have to worry about any stats; I just assembled a team with the player targets I had set down. I stopped worrying about overbidding. After all, the only way you can overbid is if you know what a player is actually worth… and we don’t (Chapter 1). So I just focused on Assets and Liabilities (Chapter 4), and drafting the most balanced roster I could (Chapter 5).

Tout Wars has several rules quirks that required some tweaks to BABS:

– On base average replaces batting average.

– One outfield slot is replaced by a “swingman,” who can be any batter or pitcher.

– You can draft any breathing player – majors, minors, foreign, etc. – so long as he’s not on a roster of the other league (in this case, NL).

Here was my plan:

Note that these budget prices are actually $10 tiers. Since there is only a 65% chance that a player projected for a certain dollar value will finish the season within plus-or-minus $5 of that projection, the best we can do is project in $10 spans. Each value above represents the mid-point of those ranges.

The planning process began with considering the Assets in which I wanted to invest my draft dollars. In looking at the $35 tier (players likely to earn over $30), I saw several positions that would give me targeting options. I decided to focus on rostering one 1b/3b in that tier, and falling back to OF if necessary. My targets were Josh Donaldson, Edwin Encarnacion and Chis Davis, or failing that, one of Justin Upton or Jose Bautista.

For Liabilities, I was committed to leaving my risks for the $5 tier. I like to draft conservatively, using in-season roster management to push my team up in the standings. But it brings up an interesting point. In redraft leagues, the eventual winner is quite often the one who has the most surprise performers on his team and perhaps takes the most risks at the draft table. Given the high performance variability in today’s game, this seems to be the case more and more.

In fact, there was an underlying mantra during Tout weekend that seemed to permeate the draft behavior in these winner-take-all leagues. It was, “You have to be willing to lose big.” As a result, there were more extreme strategies than I’ve ever seen in all four drafts. High-end players were routinely overbid by $3-$5 dollars, and sometimes more. The dearth of productive catchers pushed Mike Gianella to corner the market by rostering four of them. Chris Liss drafted the entire Yankees bullpen. Derek Carty rostered the entire Dodgers starting rotation.

As much as you can plan what you are going to do, you can’t predict what other owners will do. That often puts my conservative approach at a disadvantage. So it didn’t take long for my plan to nearly get derailed.

In my AL-only draft, Steve Moyer decided he was going to overpay for top-end offense and purchase a bare-bones pitching staff ($12 total, as it would turn out). That changed the entire economics of the auction, flooding the market with excess dollars. The bidding up and down the draft was affected, leaving 45 players to the $1 end game. That was high for a league that has shown a more balanced bidding history. We had 37 one-dollar players in 2015, 37 in 2014 and 32 in 2013.

So, things seemed strange right from the beginning. I had hoped Josh Donaldson would go for about $35 but I pushed his bidding into the upper $30s before dropping out. Moyer bought him for $40. I hoped Edwin Encarnacion would be more affordable. Thankfully, I was able to get him for $32.

So, after that buy, I picked up Carlos Gomez for $29 (again, a few dollars more than I had anticipated) and my anchor starter, Corey Kluber for $27. As the draft progressed, I stocked up with several power bats but found myself getting priced out of speed as well as the few good hitters who were rated high for OBP. Then it was just a matter of filling in the gaps as best as I could.

Here was the result:

How did I do relative to the BABS targets?

I needed 8 full-time batters; I rostered 9.

I needed 9 power hitters; I rostered 11, including two P+ hitters. I believe I am strong in this area and could have excess to trade.

I needed 4 speedsters; I rostered 5, but one is Max Kepler. I’m not confident that I have enough stolen base potential.

I needed 9 batting average units (I am going to change that moniker soon); I drafted 12. However, nearly all are moderate contributors and only Encarnacion is going to provide much help in OBP. We’ll have to see how this plays out.

I needed 6 starting pitchers and 1 front-line closer. Only Kluber, McHugh and Volquez are guaranteed 180-inning arms. McCullers gives me some upside potential at a relatively inexpensive price, though the staff’s liability limits center on him. There is work to do here.

K-Rod and Cishek give me two potential front-line closers, with Jepsen a possible third.

I needed 4 pitchers providing ERA support and strikeouts; I rostered 8 of each but most are in the bullpen or not likely to start the season in the rotation.

The Liabilities side, well…

Michael McKenry was a throwaway player in a brutally weak catcher pool. I don’t expect him to get much playing time or to have any impact on my roster, and I’ll be jumping on any potential upgrade during the season. So I won’t say that his Liabilities shouldn’t be counted against me, but… well, okay yes… his Liabilities should not be counted against me. (My roster, my rules, my rationalizations.)

For the rest of my batters, I kept to the limit of two Health and two Experience dings. I didn’t do quite as well with pitching, thanks to McCullers and the Shane Greene wild card. Let’s just leave it at that.

I think this is indicative of the depth of the AL/NL-only player pool. For those used to playing in mixed leagues, it’s tough to look at my roster and not snicker. Three Escobars? Have you ever seen such an incredibly boring group? But when you have to dig this deep, you have tough choices to make. I wasn’t happy to nominate the skill-less Edinson Volquez for $1, but a full-time pitcher with no Liabilities has value in an AL-only context. I think they call that an “innings-eater.”

By the end-game, some of the biggest choices were between rostering flawed major leaguers or speculating on minor leaguers. For instance, when I bid $5 on Jose Berrios, I was looking at BABS and there was a veteran 180+ inning starting pitcher who had bubbled up to the top of the list. But I couldn’t bear to put Ubaldo Jimenez on my team.

And then it was all about remembering not to base my draft decisions on NOW (Chapter 2). What we are seeing here in late March is nothing like what we will be seeing in a week, or a month, so you have to look ahead to the fluidity of the season. I follow one overriding rule in the end-game: “Find a path to playing time, and then speculate smart.”

So, for Caleb Joseph, I am hoping that Matt Wieters is not fully healthy. For Brock Holt, I am looking at Dustin Pedroia’s injury history and Pablo Sandoval’s girth. Kevin Jepsen is blocked from saves by Glen Perkins’ gimpy side, neck and back.

For Max Kepler, I need Byron Buxton to continue to struggle, Miguel Sano to regress or push Trevor Plouffe to the bench, or even Joe Mauer’s bat to finally wither to nothing. The failure of over-hyped Byun Ho Park would help too. There are several paths to potential playing time there.

For Shane Greene, I am hoping he is healthy, for one. But ahead of him, I see Anibal Sanchez and Daniel Norris still battling injuries and Mike Pelfrey being, well, Mike Pelfrey.

For Jose Berrios, it’s tough for me to imagine such a talent can’t overtake at least one of the low-skilled Twins rotation incumbents (“low-skilled” is incredibly diplomatic of me, isn’t it?). Ricky Nolasco? Tommy Milone? Really?

For some of these, it may be more of a reach to anticipate a path to playing time, but it only takes one path to clear.

This process is necessary in a single-league end-game. All that’s left in the free agent pool now are a handful of bench players, a smattering of #2 catchers, and tons and tons of relief pitchers. The AL Touts have picked it pretty clean.

But odds are this year’s winning owner will be the one who FAABs the still-available Pelfrey before he starts his run to the 2016 Cy Young award.