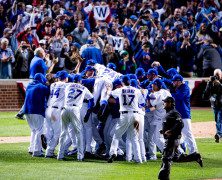 A BABS-Eye View of the Pennant Races

(FREE ARTICLE) The last time I attempted pre-season standings projections was when Bill Clinton was faithful. I’ve always considered them a fun exercise with nearly no basis in reality (like Bill’s exploits, I suppose). Opening Day is just a starting point for a season full of roster activity, so to project what October will look like based on today’s rosters is pointless.

But BABS really, really wants to do this.

Frankly, the balance sheet perspective offers up some interesting insights. The risks associated with six months of roster management are somewhat baked into the process. Could it provide a more accurate view?

But BABS wants to do it anyway. (Grrr.)

So I isolated the top 10 batters and top 10 pitchers on each team using the BABS ratings. These represented a reasonable core, and for some teams included a top prospect or two. Then I just ranked each 20-player team unit.

Was this the best method for handling the task? Heck, we’re trying to predict what’s going to happen in six months – no method is best. BABS should he happy I even took the time to do this. She should get over herself.

Okay, so I was happy to see that BABS provides at least a reasonably palatable ranking. Toronto’s offense is among the three best in baseball (Colorado and Detroit are the others) and their power paces all 30 teams. However, their pitching is only third best in the division and 11th in the AL. The Jays also have the least injury risk in the division.

The Yankees’ second place ranking behind Toronto represents the smallest gap of all six divisions, so the AL East could, in fact, be a toss-up. When you separate skill from risk, the Bombers have the division’s best pitching (surprise!), though their injury risk is not insignificant. Boston is in a sea by itself, then Tampa and Baltimore will likely fight it out for 4th place. The Rays have the most Injury risk in baseball.

The Indians have far and away the best pitching in the division and just enough offense to support it. The Tigers, Twins and Royals are all pretty much bunched up in the middle; any one could finish in 2nd or 4th as they each have some key flaws.

The Tigers’ offense could be huge, with the 2nd best batting average potential in baseball (behind San Francisco), but their pitching is the worst in the division. The Twins have the best power in the division, but a lot of it is speculative as they shoulder the most Experience risk (Sano, Park, etc.). The defending champion Royals have the most speed and least Experience risk (of all 30 teams!) but significant Injury risk.

I thought that these rankings might make a mockery of BABS but then Joe Sheehan came out with his projections that also put the Mariners on top. How does this happen? Slightly better pitching than Houston; slightly better BA potential than the Angels; the least Injury risk in the division.

But the Astros are close. They own the most power and – oddly enough – the least Experience risk – but also significant BA downside. Texas and Oakland will be close, the difference being that the A’s own the most pitching Liabilities in the AL.

While the world lauds the Mets for their incredible starting rotation, the Nationals actually edge them out in overall pitching thanks to far less Experience risk. But the Nats have the most Injury risk in the division, which pushes them into second place.

As much as analysts are trying to downplay the Cubs hype, BABS agrees that Chicago is baseball’s best team on paper. While their Assets don’t lead the pack in any one category, the one list they do take charge of is Injury risk. They have the fewest Liabilities there in all of baseball, just ahead of Arizona.

The gap between them and the Cards is not insignificant, and then to the Pirates is a decent margin as well. Most consider this a three-team race; it might not be.

While the Giants are last in the NL West in power, they more than offset that with the best BA in baseball and the best pitching in the division. The D-backs and Dodgers should fight it out for second place, and the Padres might even have an outside shot here.

As usual, the Rockies have the ultimate bipolar team. They combine a top 3 offense with the worst pitching skill and most pitching risk in baseball.

5 thoughts on “A BABS-Eye View of the Pennant Races”