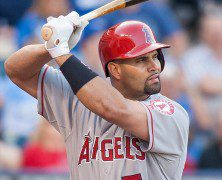 Albert Pujols posted a 40-95-.244 season in 2015, his highest home run total since 2010. That was worth $20 in Rotisserie dollars, enough to move him up from 9th to 7th overall in lifetime earnings during the Rotisserie era (1980-present), according to just-released statistics at RonShandler.com.

Pujols is ranked second on the list of active players, behind Alex Rodriguez ($600).

Miguel Cabrera also made major inroads on the lifetime listings.

However, his 2016 performance broke a string of six consecutive seasons earning first round value. That tied him with four other players for most consecutive Top 15 finishes — Eddie Murray, Alex Rodriguez, Albert Pujols and Ryan Braun.

There are only two batters who have ever posted longer streaks — Rickey Henderson (7) and Barry Bonds (9). Among pitchers, the top streaks of consecutive first round finishes belong to Greg Maddux (8) and Roger Clemens (7).

The 2016 Rotisserie Hall of Fame inductees will be announced on January 4, one day before the BBWAA makes their announcement.