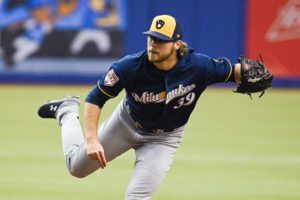 For many years when I was at BaseballHQ.com, we conducted what I called our  annual Longshot Caucus. This exercise was slightly different than the standard “bold projections” fare published elsewhere. These were not just random “Aaron Judge will hit 40 HR” proclamations. The writers were instructed to toss off the shackles of preconception and consider more “what-ifs” and contingencies. I encouraged them to look at the season as a blank slate.

BABS gives us a head start on this exercise. By presenting ratings and rankings as we do, undervalued players with great skills pop up immediately. I don’t have to tell you about the HR potential of C.J. Cron or Yordan Alvarez. Just scan the list and you will find a bunch of these possibilities yourself.  Still, I’ve borrowed the idea for Doug, Pat and I to compile a bunch of our own, with a BABsian spin. Here goes…

Corbin Burnes (e,K+) will win 16 games with a 3.00 ERA. Burnes (pictured) has what it takes on the skills side…premium velocity, dominance, improved control, and a high ground ball rate. What he hasn’t had is a full season. He teased us with 38 great innings in 2018, which were negated by his complete collapse in 2019; in 2020, he looked great again. As the most skilled pitcher behind Brandon Woodruff in the Brewers rotation, he should get his innings. The only question is health.

MacKenzie Gore (k) will enter rotation, stay, and post 10 wins, 150 strikeouts. Four of San Diego’s top five starting pitchers are perennial injury risks. Gore’s 4-pitch mix will gets its chance and he will not waste it.

Elieser Hernandez (k) will win 12 games with a 3.25 ERA. Hernandez is looking to build on his solid 6-start performance in 2020. On the low-stress Marlins, he could take a step up towards his 2019 minor league BABS rating (E+,KK).

Corey Knebel (e,KK) will take over the closer’s role in LA, save 20 games. In 2017, Knebel saved 39 games for Milwaukee (E+,K+ that year), and held the role into 2018 before succumbing to TJS. He’s worked his way back, and while his 2020 line was uninspiring, his old velocity returned in September. With Kenley Jansen showing some small signs of decline, Knebel could leap-frog his way into 9th innings again.

Francisco Lindor (p,s,a) will disappoint his fantasy owners. Despite being healthy and enjoying a favorable regional AL/NL Central schedule, Lindor had a down year by his standards. His stats extrapolated over a full season would look like 22/73/.258 with 81 runs and 16 steals. His move to a new team in a pitcher-friendly park could reveal that stat line as his new normal.

Marcell Ozuna (p,AV) will fall well short of his ADP. Last year, Ozuna played in all 60 games for Atlanta, putting up MVP-worthy numbers, but two-thirds of his games were as at designated hitter. With the DH gone in the NL this year, his defensive deficiencies may take a toll on his playing time, similar to when he only played 130 games in the Cardinals OF in 2019. BABS thinks his skills are already below his market price, and the added burden of playing the OF again will push him closer to his 2019 stat line.

Luis Patino (KK) will become the poster-boy for the modern pitcher, getting 10 wins, 10 saves, 100 Ks.  Tampa Bay continues to innovate, and Kevin Cash will showcase (in numerous ways) his prize return from the Blake Snell trade. Patino will open, he will piggyback and he will close.

Hunter Renfroe (PW) will hit 35 HR with 100 RBI. There is little in his way for full-time at-bats aside from the oft-injured Franchy Cordero. Hunter slots in the lineup behind Alex Verdugo, Xander Bogaerts, J.D. Martinez and Rafael Devers, leaving him with ample RBI opportunities.

Alex Reyes (KK) will inherit the closer role, notch 20 saves. Finally comfortable in the bullpen, Reyes will shed his fragile reputation and usurp Jordan Hicks (himself injury-prone) and Giovanny Gallegos by mid-season.

Edwin Rios (P+) will hit 30 HRs. With just the aging and fragile Justin Turner blocking him from the Dodgers’ starting 3B role, Rios will grab the role by May and contribute the same power skills he showed in the minors (P+|-A).

Josh Rojas (s|-A) will hit 15 HRs, steal 20 bases with a .275 average. Rojas is having a great spring and is pushing his way into a larger role in Arizona. His “official” BABS rating is nothing to write home about, but combine his 2019 minor league rating (p,SB,a) with his spring training numbers (3 HR, .348 BA) and you can see the upside.

Miguel Sano (P+|-A) will lead the AL with 45 home runs. Last season, once Sano recovered from his COVID bout, he hit a home run every 10 at bats during a three-week September stretch. He was nearly on that pace in 2019, hitting 34 HR in only 380 at bats, a crazy 37 percent HR/F ratio. BABS concurs that his power skills are extreme, but he’s yet to hit even 35 in a season, nor has he ever reached 450 AB. We made this prediction a year ago… with 500 or more AB, 50 HR are within his reach.

Nick Senzel (s) will stay healthy, steal 25 bases. After a 2020 marred by COVID-19, Senzel is the leader in the clubhouse for CF duties in Cincinnati. With health, he will finally showcase his (Statcast rated) 97th percentile speed over a full season.

Myles Straw (S+|-P) will lead the majors in stolen bases. BABS continues to rate Straw’s speed skills as extreme, but he has been blocked for playing time in the Houston outfield. No more; a strong spring could lock him into the CF spot. Though he struggled at the plate in 2020, he did post a .378 OBP in 108 AB in 2019, so getting on base should not be a problem. His defense will keep him in the lineup and a bright green light should allow him to rack up 40-50 bags.

Raimel Tapia (SB,AV|-P) will hit .300 with 30 stolen bases. Last year, Tapia showed signs of improving his plate skills. Now, he appears to be the frontrunner to bat leadoff and could put up 600 AB of prime output.

Andrew Vaughn (|-P) will not live up to his draft day hype. The market continues to push Vaughn up the board —  his ADP currently at Round 15 — with expectations that he will own the DH position in a powerful White Sox lineup. However, BABS says Vaughn’s skills are far from Major League ready. His experience is a grand total of 190 AB at the Single-A level, with five HR and a .252 average. Reality will fall short of hype here.