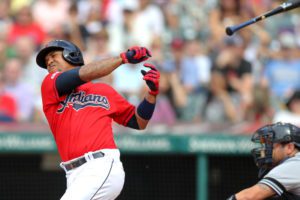 The BABS database provides historical scans of each player, going back to 2014. These scans not only chart their statistical output but also how BABS has rated their performance. The player’s marketplace valuation for each season – ADPs and AAVs – is also charted for the past three years (though not shown in these reports).

This treatment often reveals some underlying trends that the raw statistics fail to discover. Starting with the next update, we’ll look at a bunch of interesting players where BABS might see things a little bit differently from the public narrative.

Here is a sample:

The narrative: Ramirez had been enjoying skyrocketing trends coming into 2019. His elite power and speed made him an easy first round pick. Most touts projected some minor pullback but still expected him to be a near lock for a 30-30 follow-up.

But Ramirez stumbled badly early on, hitting just 5 HRs with a .214 average at the midpoint, though stealing 18 bases. After the Break, he returned to a more vintage performance (18 HR, .321). Today, the marketplace is pretty much giving him a mulligan for that first half. His current ADP is just outside the first round.

BABS’ take: While Ramirez remains a triple asset threat, he has been displaying only moderate power skill (p) for three straight years. Rather than looking at the 39 HRs he hit in 2018 as a potential upside level he could return to, BABS thinks that season was more of an outlier. Equally notable is the AV trend that BABS has been tracking (A+, AV, a) which could be worrisome. It’s possible he might regress to (AV) but odds are less that we’ll see an improvement to (PW).

Given that BABS rates skills against a player’s peers – who are hitting a ton of HRs lately – that (p) rating might still translate to 25-30 HR, though a 30-30 season seems like a longshot. BABS rates him as (p,AV) and would probably bid on a 25-25-.275 line. That’s still likely a 2nd round value at par; pushing him up towards the early part of that round may not be prudent. If he’s still out there at pick 25, or anything under $30, jump in.